1. Which type of routing protocol uses LSAs and TLVs to support extended features?

Hint/Explanation: Link-state routing protocols include capabilities such as LSAs for OSPF and TLVs (type/length/value) for IS-IS that allow them to support extended features.

2. What are two characteristics of link-state routing protocols? (Choose two.)

Hint/Explanation: Link-state protocols like OSPF and ISIS use more CPU and memory resources than distance vector protocols do because they maintain a complete synchronized map of the network and run the SPF algorithm to determine the best path.

3. What data is used by OSPF and ISIS for loop prevention?

4. Which routing protocol incorporates characteristics of both distance vector and link-state protocols?

Hint/Explanation: As a hybrid routing protocol, EIGRP incorporates the characteristics of both distance vector and link-state protocols. It uses bandwidth and other metrics rather than hop count to determine the best path and this information is advertised to all neighbors.

5. How do EIGRP routers establish and maintain neighbor relationships?

6. A router has installed several routes into the routing table. How will the router determine which route to use to forward packets?

Hint/Explanation: The route chosen for forwarding a packet is the route with the longest prefix length matching the destination network of the packet. The metric and administrative distance are used to determine which routes will appear in the routing table.

7. What is the effect of configuring the ipv6 unicast-routing command on a router?

Hint/Explanation: When the ipv6 unicast-routing command is implemented on a router, it enables the router as an IPv6 router. Use of this command also assigns the router to the all-routers multicast group.

Hint/Explanation: In a recursive static route, only the next-hop IPv6 address is specified. As a consequence, the router must perform a recursive route table lookup to find an exit interface associated with the network of the IPv6 address.

10. Refer to the exhibit. Which command will properly configure an IPv6 static route on R2 that will allow traffic from PC2 to reach PC1 without any recursive lookups by router R2?

11. Refer to the exhibit. Router R1 has an OSPF neighbor relationship with the ISP router over the 192.168.0.32 network. The 192.168.0.36 network link should serve as a backup when the OSPF link goes down. The floating static route command ip route 0.0.0.0 0.0.0.0 S0/0/1 100 was issued on R1 and now traffic is using the backup link even when the OSPF link is up and functioning. Which change should be made to the static route command so that traffic will only use the OSPF link when it is up?​

12. What is used by BGP to guarantee a loop free path to reach a destination?

Hint/Explanation: BGP is a path vector protocol which uses several path attributes to determine the best path. To prevent loops BGP updates include a record of each autonomous system that the routing advertisement traversed. A BGP router that receives the update should not see its own AS in the AS Path. If it did, it would indicate a loop.

13. What is the purpose for creating VRFs on a router?

Hint/Explanation: Virtual routing and forwarding, or VRF, is a technology that creates several separate virtual routers on a single physical router. Each of the virtual routers acts as an independent and separate router so that their paths are isolated from each other.

Hint/Explanation: Virtual routing and forwarding, or VRF, is a technology that creates several separate virtual routers on a single physical router. Each of the virtual routers acts as an independent and separate router so that their paths are isolated from each other.

15. What is the administrative distance of an IS-IS route?

16. Refer to the exhibit. R2 has two possible paths to the 192.168.10.4 network. What would make the alternate route meet the feasibility condition?

17. Which protocol number is used to indicate that an EIGRP packet is encapsulated in an IP packet?

Hint/Explanation: In an IP packet header, the field protocol number indicates which protocol is used in the encapsulated PDU. 6 is TCP, 17 is UDP, 88 is EIGRP, and 89 is OSPF.

18. Match the description to the EIGRP packet type. (Not all options are used.) 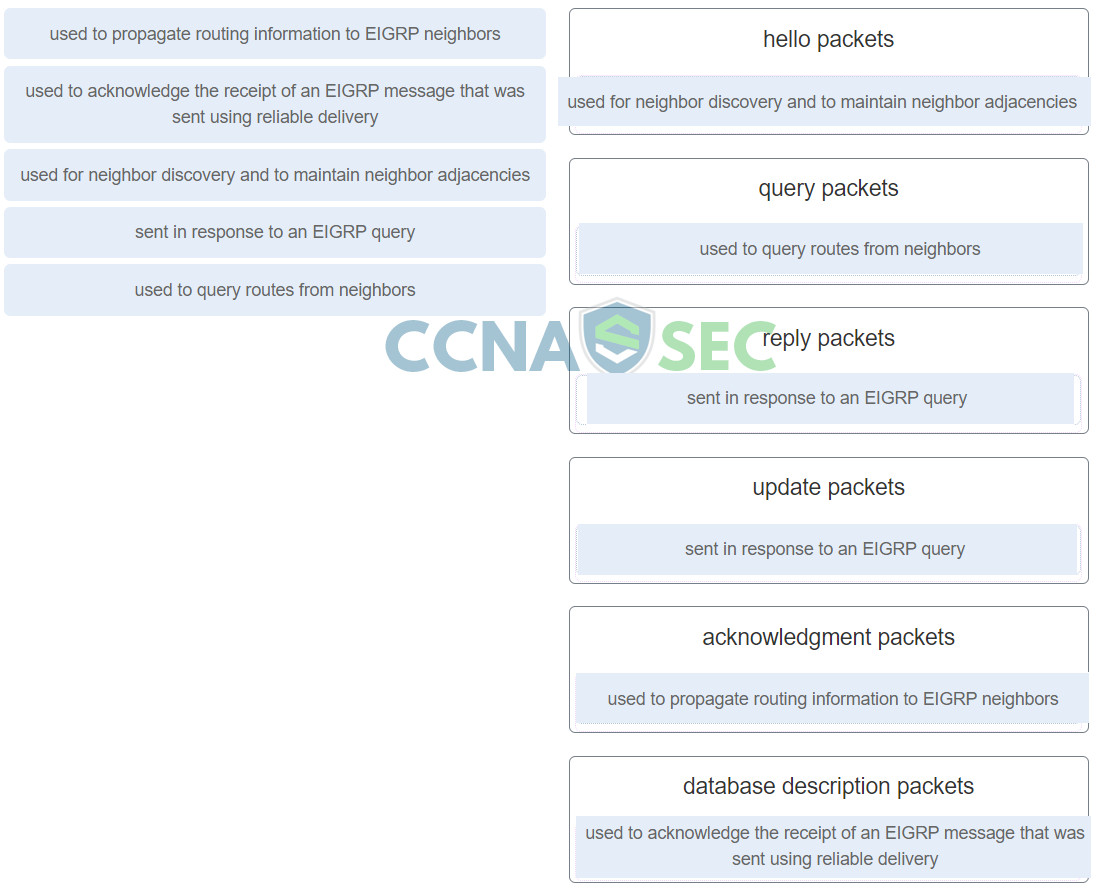 19. Which statement describes the autonomous system number used in EIGRP configuration on a Cisco router?

Hint/Explanation: The autonomous system number used in the EIGRP configuration is not associated with the Internet Assigned Numbers Authority (IANA) globally assigned autonomous system numbers that are used by external routing protocols. It just functions as a process ID, which is necessary because a router may run multiple instances of EIGRP. Each instance of EIGRP can be configured to support and exchange routing updates for different networks. An organization has the freedom to choose its own AS number in the EIGRP configuration.

20. Which bandwidth value is used when calculating the EIGRP metric of a route?

Hint/Explanation: The bandwidth factor that is used to calculate the composite metric of the EIGRP is defined as the slowest bandwidth of all outgoing interfaces between the source and destination. 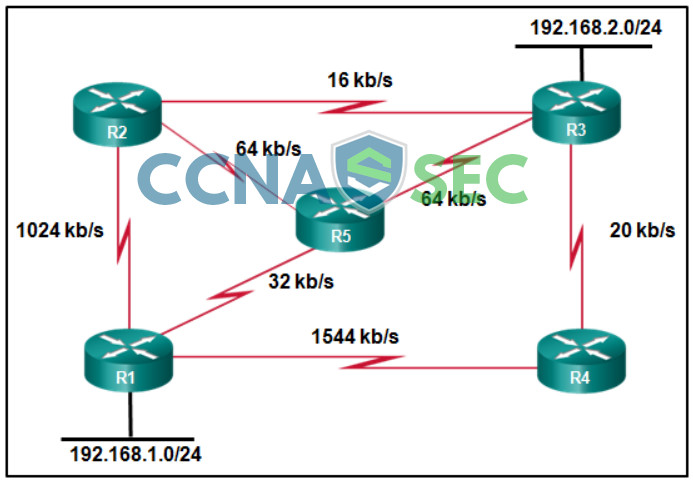 22. Which two metric weights are set to one by default when costs in EIGRP are being calculated? (Choose two.)

Hint/Explanation: Routing protocols with two or more paths to a destination network can load balance traffic across multiple paths. EIGRP is the only routing protocol that supports load balancing across unequal cost paths.

24. How has the EIGRP routing protocol improved by having interface delay measured in picoseconds instead of microseconds?

Hint/Explanation: The original values used to calculate EIGRP metrics were in microseconds for delay and kilobytes per second for bandwidth. When using EIGRP wide metrics, the delay units are picoseconds and within the formula, the metric is found by multiplying by 65,535 instead of 256, thus providing support of interface bandwidth up to 655 terabits per second.

25. If all router Ethernet interfaces in an EIGRP network are configured with the default EIGRP timers, how long will a router wait by default to receive an EIGRP packet from its neighbor before declaring the neighbor unreachable?

Hint/Explanation: EIGRP uses the hold time as the maximum time it should wait for receiving a hello packet (or other EIGRP packets) from its neighbor before declaring that the neighbor is unreachable. By default the hold time is 3 times greater than the hello interval. On LAN interfaces, the default hello time is 5 seconds and the default hold time is 15 seconds.

26. What two conditions will result in an EIGRP route going into the active state? (Choose two.)

Hint/Explanation: If a successor is no longer available, and there is no feasible successor, an EIGRP route will be put into the active state while the router actively searches for a new path to the destination.

27. An EIGRP router loses the route to a network. Its topology table contains two feasible successors to the same network. What action will the router take?

28. Which feature of the EIGRP routing protocol can provide fast re-convergence without DUAL recomputation in the event of a route failure?

Hint/Explanation: EIGRP avoids DUAL recomputation of routes whenever possible by maintaining a list of backup routes (feasible successors) in the topology table already determined to be loop-free. If the primary route (the successor route, which is in the passive state) in the routing table fails, the best backup route is immediately added to the routing table. A route in the active state is in the process of being recomputed by DUAL.

29. What are two benefits of applying summarization to networks within a company that uses the EIGRP routing protocol? (Choose two.)

Hint/Explanation: When summarization is applied within any routing protocol, the routing tables within the organization are smaller. An added benefit to EIGRP-enabled routers is that when a route goes active during convergence or when a link has gone down and there is no feasible successor, the number of routers that receive query packets is reduced.

30. Refer to a portion of an EIGRP topology table: