1. Which personnel in a SOC is assigned the task of verifying whether an alert triggered by monitoring software represents a true security incident?

2. After a security incident is verified in a SOC, an incident responder reviews the incident but cannot identify the source of the incident and form an effective mitigation procedure. To whom should the incident ticket be escalated?

Explanation: (ISC)2 is an international nonprofit organization that offers the CISSP certification.

5. What is a benefit to an organization of using SOAR as part of the SIEM system?

6. Which personnel in a SOC are assigned the task of hunting for potential threats and implementing threat detection tools?

Explanation: In a SOC, Tier 3 SMEs have expert-level skills in network, endpoint, threat intelligence, and malware reverse engineering (RE). They are deeply involved in hunting for potential security threats and implementing threat detection tools.

7. An SOC is searching for a professional to fill a job opening. The employee must have expert-level skills in networking, endpoint, threat intelligence, and malware reverse engineering in order to search for cyber threats hidden within the network. Which job within an SOC requires a professional with those skills?

Explanation: Tier 3 professionals called Threat Hunters must have expert-level skills in networking, endpoint, threat intelligence, and malware reverse engineering. They are experts at tracing the processes of malware to determine the impact of the malware and how it can be removed.

8. Which three are major categories of elements in a security operations center? (Choose three.)

Explanation: The three major categories of elements of a security operations center are people, processes, and technologies. A database engine, a data center, and an Internet connection are components in the technologies category.

9. Which KPI metric does SOAR use to measure the time required to stop the spread of malware in the network?

Explanation:
The common key performance indicator (KPI) metrics compiled by SOC managers are as follows:
• Dwell Time: the length of time that threat actors have access to a network before they are detected and the access of the threat actors stopped
• Mean Time to Detect (MTTD): the average time that it takes for the SOC personnel to identify that valid security incidents have occurred in the network
• Mean Time to Respond (MTTR): the average time that it takes to stop and remediate a security incident
• Mean Time to contain (MTTC): the time required to stop the incident from causing further damage to systems or data
• Time to Control the time required to stop the spread of malware in the network

10. Which three technologies should be included in a SOC security information and event management system? (Choose three.)

11. The term cyber operations analyst refers to which group of personnel in a SOC?

12. How does a security information and event management system (SIEM) in a SOC help the personnel fight against security threats?

13. What job would require verification that an alert represents a true security incident or a false positive?

Explanation: A Cybersecurity Analyst monitors security alert queues and uses a ticketing system to assign alerts to a queue for an analyst to investigate. Because the software that generates alerts can trigger false alarms, one job of the Cybersecurity Analyst would be to verify that an alert represents a true security incident.

14. When a user turns on the PC on Wednesday, the PC displays a message indicating that all of the user files have been locked. In order to get the files unencrypted, the user is supposed to send an email and include a specific ID in the email title. The message also includes ways to buy and submit bitcoins as payment for the file decryption. After inspecting the message, the technician suspects a security breach occurred. What type of malware could be responsible?

Explanation:Ransomware requires payment for access to the computer or files. Bitcoin is a type of digital currency that does not go through a particular bank.

16. Match the SOC metric to the description. (Not all options are used.) 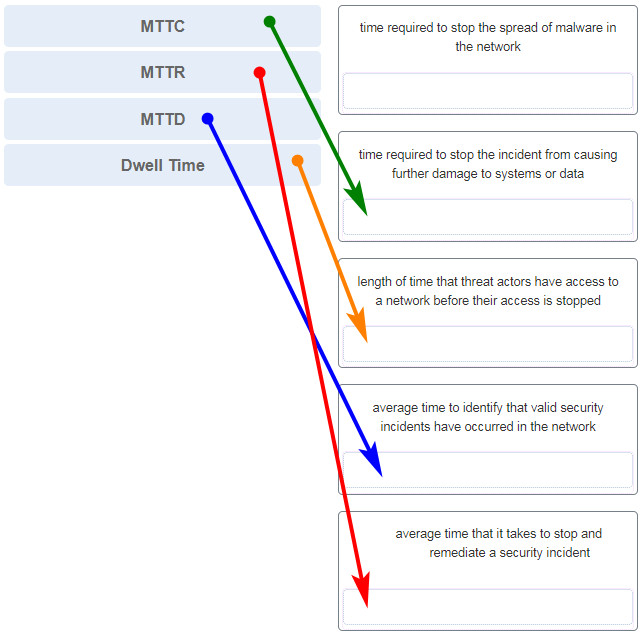 Explanation: SOCs use many metrics as performance indicators of how long it takes personnel to locate, stop, and remediate security incidents.

17. A group of users on the same network are all complaining about their computers running slowly. After investigating, the technician determines that these computers are part of a zombie network. Which type of malware is used to control these computers?

Explanation: Cyberwarfare is Internet-based conflict that involves the penetration of the networks and computer systems of other nations. Organized hackers are typically involved in such an attack.

19. Why do IoT devices pose a greater risk than other computing devices on a network?

Explanation: IoT devices commonly operate using their original firmware and do not receive updates as frequently as laptops, desktops, and mobile platforms.

Explanation: Personally identifiable information (PII) is any data that could potentially identify and track a specific individual. A credit card number and street address are the best examples of PII.

Explanation: One of the more lucrative goals of cybercriminals is obtaining lists of personally identifiable information that can then be sold on the dark web. The dark web can only be accessed with special software and is used by cybercriminals to shield their activities. Stolen PII can be used to create fake accounts, such as credit cards and short-term loans.

22. A company has just had a cybersecurity incident. The threat actor appeared to have a goal of network disruption and appeared to use a common security hack tool that overwhelmed a particular server with a large amount of traffic. This traffic rendered the server inoperable. How would a certified cybersecurity analyst classify this type of threat actor?

Explanation:Amateurs or script kiddies use common, existing tools found on the internet to launch attacks. Hacktivists disrupt services in protest against organizations or governments for a particular political or social idea. State-sponsored threat actors use cyberspace for industrial espionage or interfering with another country in some way. Terrorist groups attack for a specific cause.

23. A user calls the help desk complaining that the password to access the wireless network has changed without warning. The user is allowed to change the password, but an hour later, the same thing occurs. What might be happening in this situation?

Explanation:Man-in-the-middle attacks are a threat that results in lost credentials and data. These type of attacks can occur for different reasons including traffic sniffing.

Explanation: The Health Insurance Portability and Accountability Act (HIPAA) requires that all patient personally identifiable healthcare information be stored, maintained, and transmitted in ways that ensure patient privacy and confidentiality.

25. A worker in the records department of a hospital accidentally sends a medical record of a patient to a printer in another department. When the worker arrives at the printer, the patient record printout is missing. What breach of confidentiality does this situation describe?

Explanation: Protected Health Information (PHI) includes patient name, addresses, visiting dates and more. The Health Insurance Portability and Accountability Act (HIPAA) regulates and provides severe penalties for breaches of PHI. EMRs (Electronic Medical Records) are documents created and maintained by the medical community that contain PHI. Personally identifiable information (PII) is any information that can be used to positively identify an individual, such as name and social security number. Personal Security Information (PSI) is related to information about an individual such as passwords, access keys, and account details.

26. Which cyber attack involves a coordinated attack from a botnet of zombie computers?

Explanation: DDoS is a distributed denial-of-services attack. A DDoS attack is launched from multiple coordinated sources. The sources of the attack are zombie hosts that the cybercriminal has built into a botnet. When ready, the cybercriminal instructs the botnet of zombies to attack the chosen target.

27. What is the main purpose of cyberwarfare?

Explanation: Cyberwarfare is Internet-based conflict that involves the penetration of the networks and computer systems of other nations. The main purpose of cyberwarfare is to gain advantage over adversaries, whether they are nations or competitors.

28. What type of cyberwarfare weapon was Stuxnet?

Explanation:The Stuxnet worm was an excellent example of a sophisticated cyberwarfare weapon. In 2010, it was used to attack programmable logic controllers that operated uranium enrichment centrifuges in Iran. 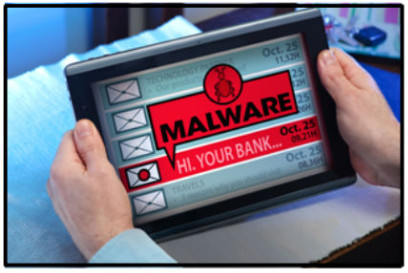 Explanation: An email attachment that appears as valid software but actually contains spyware shows how malware might be concealed. An attack to block access to a website is a DoS attack. A hacker uses search engine optimization (SEO) poisoning to improve the ranking of a website so that users are directed to a malicious site that hosts malware or uses social engineering methods to obtain information. A botnet of zombie computers is used to launch a DDoS attack.

30. What websites should a user avoid when connecting to a free and open wireless hotspot?

Explanation: Many free and open wireless hotspots operate with no authentication or weak authentication mechanisms. Attackers could easily capture the network traffic in and out of such a hotspot and steal user information. Therefore, users who use free and open wireless hotspots to connect to websites should avoid giving any personal information to the websites.

31. In a smart home, an owner has connected many home devices to the Internet, such as the refrigerator and the coffee maker. The owner is concerned that these devices will make the wireless network vulnerable to attacks. What action could be taken to address this issue?

Explanation: The Internet of Things (IoT) is facilitating the connection of different kinds of devices to the internet, like home devices such as coffee makers and refrigerators, and also wearable devices. In order to make these devices secure and not vulnerable to attacks, they have to be updated with the latest firmware.
0
Share FacebookTwitterGoogle+ReddItWhatsAppPinterestEmail