1. Which is an example of social engineering?

2. What is a significant characteristic of virus malware?

3. Which access attack method involves a software program that attempts to discover a system password by the use of an electronic dictionary?

4. Which statement describes an operational characteristic of NetFlow?

Explanation: NetFlow does not capture the entire contents of a packet. Instead, NetFlow collects metadata, or data about the flow, not the flow data itself. NetFlow information can be viewed with tools such as nfdump and FlowViewer.

5. Match the network monitoring solution with a description. (Not all options are used.) 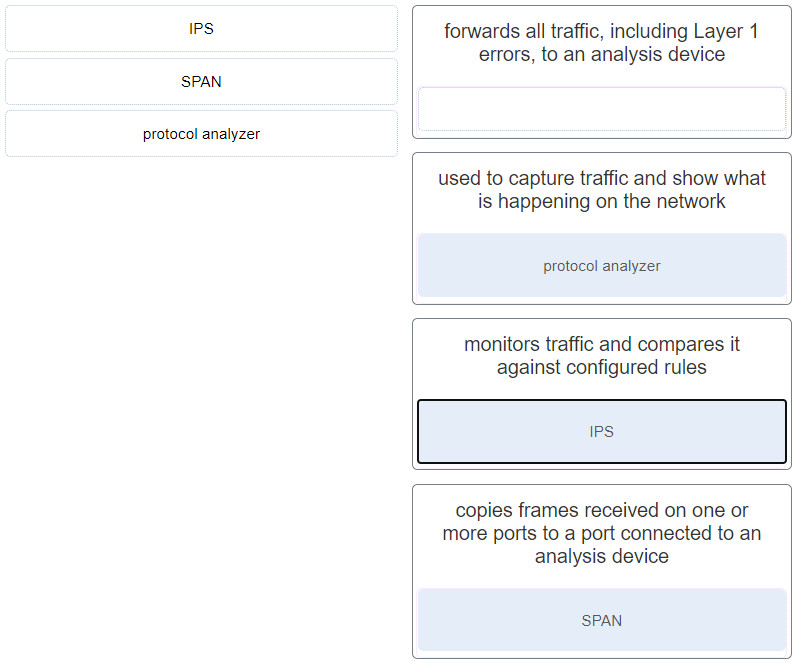 6. Which technology is a proprietary SIEM system?

Explanation: Security Information Event Management (SIEM) is a technology that is used in enterprise organizations to provide real-time reporting and long-term analysis of security events. Splunk is a proprietary SIEM system.

7. What are three functionalities provided by SOAR? (Choose three.)

8. Which devices should be secured to mitigate against MAC address spoofing attacks?

Explanation: Layer 2 attacks such as MAC address spoofing can be mitigated by securing Layer 2 devices.

9. A network administrator is checking the system logs and notices unusual connectivity tests to multiple well-known ports on a server. What kind of potential network attack could this indicate?

Explanation: A reconnaissance attack is the unauthorized discovery and mapping of systems, services, or vulnerabilities. One of the most common reconnaissance attacks is performed by using utilities that automatically discover hosts on the networks and determine which ports are currently listening for connections.

10. What is a vulnerability that allows criminals to inject scripts into web pages viewed by users?

11. Why would a rootkit be used by a hacker?

Explanation: Hackers use rootkits to avoid detection as well as hide any software installed by the hacker.

12. What causes a buffer overflow?

13. Which type of security threat would be responsible if a spreadsheet add-on disables the local software firewall?

15. A white hat hacker is using a security tool called Skipfish to discover the vulnerabilities of a computer system. What type of tool is this?

Explanation: Fuzzers are tools used by threat actors when attempting to discover the vulnerabilities of a computer system. Examples of fuzzers include Skipfish, Wapiti, and W3af.

16. Which two functions are provided by NetFlow? (Choose two.)

Explanation: NetFlow is a Cisco IOS technology that provides statistics and complete audit trails on TCP/IP flows on the network. Some of the capabilities of NetFlow include the following: 24×7 network and security monitoring, network planning, traffic analysis, identification of network bottlenecks, and IP accounting for billing purposes.

17. Which statement describes the function of the SPAN tool used in a Cisco switch?

18. What are two evasion methods used by hackers? (Choose two.)

19. Which attack involves threat actors positioning themselves between a source and destination with the intent of transparently monitoring, capturing, and controlling the communication?

Explanation: White hat hackers are actually “good guys” and are paid by companies and governments to test for security vulnerabilities so that data is better protected.

21. Once a cyber threat has been verified, the US Cybersecurity Infrastructure and Security Agency (CISA) automatically shares the cybersecurity information with public and private organizations. What is this automated system called?

Explanation: Governments are now actively promoting cybersecurity. For instance, the US Cybersecurity Infrastructure and Security Agency (CISA) is leading efforts to automate the sharing of cybersecurity information with public and private organizations at no cost. CISA use a system called Automated Indicator Sharing (AIS). AIS enables the sharing of attack indicators between the US government and the private sector as soon as threats are verified. CISA offers many resources that help to limit the size of the United States attack surface.

22. A user receives a phone call from a person who claims to represent IT services and then asks that user for confirmation of username and password for auditing purposes. Which security threat does this phone call represent?

Explanation: Worms are self-replicating pieces of software that consume bandwidth on a network as they propagate from system to system. They do not require a host application, unlike a virus. Viruses, on the other hand, carry executable malicious code which harms the target machine on which they reside.

24. What kind of ICMP message can be used by threat actors to create a man-in-the-middle attack?

25. What are two purposes of launching a reconnaissance attack on a network? (Choose two.)

Explanation: Gathering information about a network and scanning for access is a reconnaissance attack. Preventing other users from accessing a system is a denial of service attack. Attempting to retrieve and modify data, and attempting to escalate access privileges are types of access attacks.

26. Which type of network attack involves randomly opening many Telnet requests to a router and results in a valid network administrator not being able to access the device?

27. What functionality is provided by Cisco SPAN in a switched network?

Explanation: SPAN is a Cisco technology used by network administrators to monitor suspicious traffic or to capture traffic to be analyzed.

28. An attacker is redirecting traffic to a false default gateway in an attempt to intercept the data traffic of a switched network. What type of attack could achieve this?

29. What would be the target of an SQL injection attack?

Explanation: SQL is the language used to query a relational database. Cybercriminals use SQL injections to get information, create fake or malicious queries, or to breach the database in some other way.

30. The IT department is reporting that a company web server is receiving an abnormally high number of web page requests from different locations simultaneously. Which type of security attack is occurring?

Explanation: Phishing, spyware, and social engineering are security attacks that collect network and user information. Adware consists, typically, of annoying popup windows. Unlike a DDoS attack, none of these attacks generate large amounts of data traffic that can restrict access to network services.

31. Why would an attacker want to spoof a MAC address?

Explanation: MAC address spoofing is used to bypass security measures by allowing an attacker to impersonate a legitimate host device, usually for the purpose of collecting network traffic.

32. Match the security concept to the description. 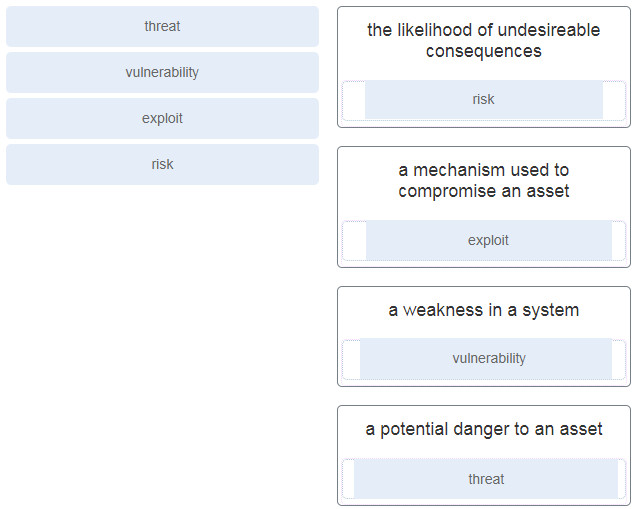 33. What is the significant characteristic of worm malware?

34. What are the three major components of a worm attack? (Choose three.)

35. A user is curious about how someone might know a computer has been infected with malware. What are two common malware behaviors? (Choose two.)

36. Which two types of attacks are examples of reconnaissance attacks? (Choose two.)

38. Which protocol is exploited by cybercriminals who create malicious iFrames?

Explanation: An HTML element known as an inline frame or iFrame allows the browser to load a different web page from another source.

39. How can a DNS tunneling attack be mitigated?

Explanation: To be able to stop DNS tunneling, a filter that inspects DNS traffic must be used. Also, DNS solutions such as Cisco OpenDNS block much of the DNS tunneling traffic by identifying suspicious domains.

40. What is the function of a gratuitous ARP sent by a networked device when it boots up?

Explanation: A gratuitous ARP is often sent when a device first boots up to inform all other devices on the local network of the MAC address of the new device.

41. What is the result of a passive ARP poisoning attack?

Explanation: ARP poisoning attacks can be passive or active. The result of a passive attack is that cybercriminals steal confidential information. With an active attack, cybercriminals modify data in transit or they inject malicious data.

42. What are two methods used by cybercriminals to mask DNS attacks? (Choose two.)

43. Match the security tool with the description. (Not all options apply.) 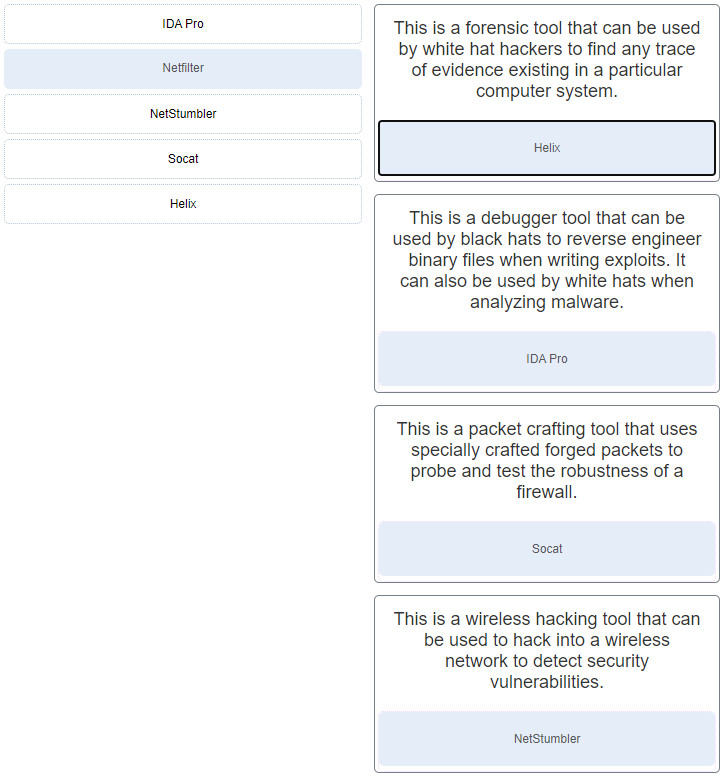 44. Match the type of cyberattackers to the description. (Not all options are used.) 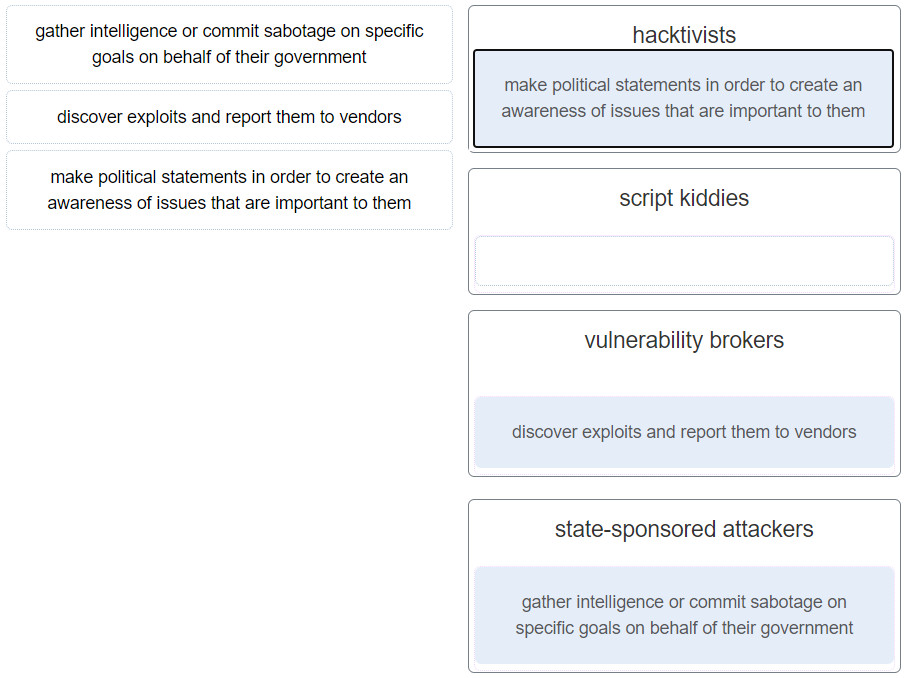 45. Match the threat actors with the descriptions. (Not all options are used.) 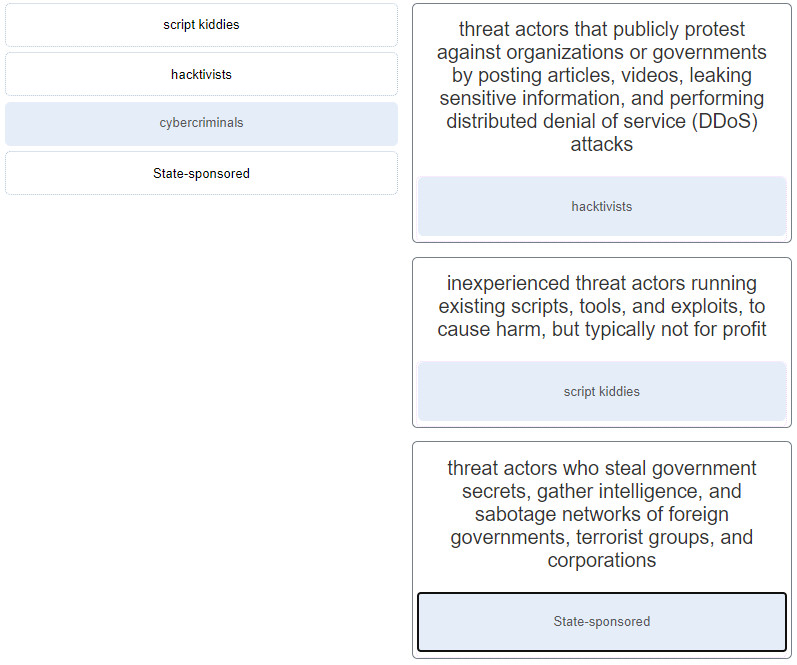 46. What scenario describes a vulnerability broker?

Explanation: Vulnerability brokers typically refers to grey hat hackers who attempt to discover exploits and report them to vendors, sometimes for prizes or rewards.

47. In what type of attack is a cybercriminal attempting to prevent legitimate users from accessing network services?

16. Which field in the IPv6 header points to optional network layer information that is carried in the IPv6 packet?

Explanation: Optional Layer 3 information about fragmentation, security, and mobility is carried inside of extension headers in an IPv6 packet. The next header field of the IPv6 header acts as a pointer to these optional extension headers if they are present.

48. Which type of attack is carried out by threat actors against a network to determine which IP addresses, protocols, and ports are allowed by ACLs?

Explanation: Packet filtering ACLs use rules to filter incoming and outgoing traffic. These rules are defined by specifying IP addresses, port numbers, and protocols to be matched. Threat actors can use a reconnaissance attack involving port scanning or penetration testing to determine which IP addresses, protocols, and ports are allowed by ACLs.

49. Which cyber attack involves a coordinated attack from a botnet of zombie computers?

Explanation: DDoS is a distributed denial-of-services attack. A DDoS attack is launched from multiple coordinated sources. The sources of the attack are zombie hosts that the cybercriminal has built into a botnet. When ready, the cybercriminal instructs the botnet of zombies to attack the chosen target.

50. What technique is a security attack that depletes the pool of IP addresses available for legitimate hosts?

51 Which type of Trojan horse security breach uses the computer of the victim as the source device to launch other attacks?

Explanation: The attacker uses a proxy Trojan horse attack to penetrate one device and then use that device to launch attacks on other devices. The Dos Trojan horse slows or halts network traffic. The FTP trojan horse enables unauthorized file transfer services when port 21 has been compromised. A data-sending Trojan horse transmits data back to the hacker that could include passwords.

52. What are two examples of DoS attacks? (Choose two.)

Explanation: The buffer overflow and ping of death DoS attacks exploit system memory-related flaws on a server by sending an unexpected amount of data or malformed data to the server.
0
Share FacebookTwitterGoogle+ReddItWhatsAppPinterestEmail