1. Which technology might increase the security challenge to the implementation of IoT in an enterprise environment?

3. Which HIDS is an open-source based product?

4. What does the telemetry function provide in host-based security software?

Explanation: The telemetry function allows for robust logging functionality that is essential to cybersecurity operations. Some host-based security programs will submit logs to a central location for analysis.

5. Which type of attack does the use of HMACs protect against?

Explanation: Because only the sender and receiver know the secret key, only parties that have access to that key can compute the digest of an HMAC function. This defeats man-in-the-middle attacks and provides authentication of where the data originated.​

6. Which objective of secure communications is achieved by encrypting data?

Explanation: A digital certificate class is identified by a number. The higher the number, the more trusted the certificate. The classes include the following:
Class 0 is for testing purposes in which no checks have been performed.
Class 1 is for individuals with a focus on verification of email.
Class 2 is for organizations for which proof of identity is required.
Class 3 is for servers and software signing for which independent verification and checking of identity and authority is done by the issuing certificate authority.
Class 4 is for online business transactions between companies.
Class 5 is for private organizations or governmental security.

8. A customer purchases an item from an e-commerce site. The e-commerce site must maintain proof that the data exchange took place between the site and the customer. Which feature of digital signatures is required?

9. What is the purpose of a digital certificate?

Explanation: Digital signatures commonly use digital certificates that are used to verify the identity of the originator in order to authenticate a vendor website and establish an encrypted connection to exchange confidential data. One such example is when a person logs into a financial institution from a web browser.

10. In a hierarchical CA topology, where can a subordinate CA obtain a certificate for itself?

11. What is the purpose for using digital signatures for code signing?

Explanation: Code signing is used to verify the integrity of executable files downloaded from a vendor website. Code signing uses digital certificates to authenticate and verify the identity of a website.

12. What technology has a function of using trusted third-party protocols to issue credentials that are accepted as an authoritative identity?

13. In addressing a risk that has low potential impact and relatively high cost of mitigation or reduction, which strategy will accept the risk and its consequences?

Explanation: There are four potential strategies for responding to risks that have been identified:
Risk avoidance – Stop performing the activities that create risk.
Risk reduction – Decrease the risk by taking measures to reduce vulnerability.
Risk sharing – Shift some of the risk to other parties.
Risk retention – Accept the risk and its consequences.

14. Which two classes of metrics are included in the CVSS Base Metric Group? (Choose two.)

Explanation: The Base Metric Group of CVSS represents the characteristics of a vulnerability that are constant over time and across contexts. It contains two classes of metrics, Exploitability and Impact.

15. Match the NIST Cybersecurity Framework core function with the description. (Not all options are used.) 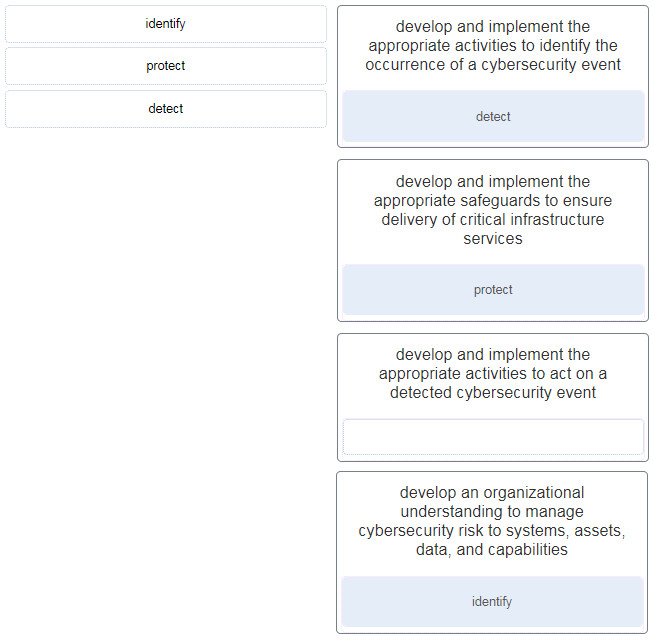 16. A cybersecurity analyst is performing a CVSS assessment on an attack where a web link was sent to several employees. Once clicked, an internal attack was launched. Which CVSS Base Metric Group Exploitability metric is used to document that the user had to click on the link in order for the attack to occur?

Explanation: The CVSS Base Metric Group has the following metrics: attack vector, attack complexity, privileges required, user interaction, and scope. The user interaction metric expresses the presence or absence of the requirement for user interaction in order for an exploit to be successful.

17. In network security assessments, which type of test employs software to scan internal networks and Internet facing servers for various types of vulnerabilities?

18. What are the three outcomes of the NIST Cybersecurity Framework identify core function? (Choose three.)

19. Which statement describes the term iptables?

20. What is the difference between an HIDS and a firewall?

Explanation: In order to monitor local activity an HIDS should be implemented. Network activity monitors are concerned with traffic and not operating system activity.

Explanation: With the anomaly-based intrusion detection approach, a set of rules or policies are applied to a host. Violation of these policies is interpreted to be the result of a potential intrusion.

23. What is the purpose of the DH algorithm?

Explanation: DH is an asymmetric mathematical algorithm that allows two computers to generate an identical shared secret, without having communicated before. Asymmetric key systems are extremely slow for any sort of bulk encryption. It is common to encrypt the bulk of the traffic using a symmetric algorithm such as DES, 3DES, or AES, and use the DH algorithm to create keys that will be used by the symmetric encryption algorithm.

24. What is a difference between symmetric and asymmetric encryption algorithms?

25. When a server profile for an organization is being established, which element describes the TCP and UDP daemons and ports that are allowed to be open on the server?

Explanation: A server profile will often contain the following:
Listening ports – the TCP and UDP daemons and ports that are allowed to be open on the server
User accounts – the parameters defining user access and behavior
Service accounts – the definitions of the type of service that an application is allowed to run on a server
Software environment – the tasks, processes, and applications that are permitted to run on the server

26. What is an action that should be taken in the discovery step of the vulnerability management life cycle?

Explanation: During the discovery step of the vulnerability management life cycle, an inventory of all network assets is made. A network baseline is developed, and security vulnerabilities are identified.

27. In what order are the steps in the vulnerability management life cycle conducted?

Explanation: There are six steps in the vulnerability management life cycle:

28. A security professional is making recommendations to a company for enhancing endpoint security. Which security endpoint technology would be recommended as an agent-based system to protect hosts against malware?

Explanation: A host-based intrusion detection systems (HIDS) is a comprehensive security application that provides antimalware applications, a firewall, and monitoring and reporting.

29. What is a feature of distributed firewalls?

Explanation: The isolated polymorphic malware file should be run in a sandbox environment like Cisco Threat Grid Glovebox, and the activities of the file documented by the system. This information can then be used to create signatures to prevent the file from entering the network again.

31. On a Windows host, which tool can be used to create and maintain blacklists and whitelists?

Explanation: In Windows, blacklisting and whitelisting settings can be managed through the Group Policy Editor.

32. In addressing an identified risk, which strategy aims to stop performing the activities that create risk?

Explanation: There are four potential strategies for responding to risks that have been identified:

33. A company is developing a security policy for secure communication. In the exchange of critical messages between a headquarters office and a branch office, a hash value should only be recalculated with a predetermined code, thus ensuring the validity of data source. Which aspect of secure communications is addressed?

34. Match the network profile element to the description. (Not all options are used.) 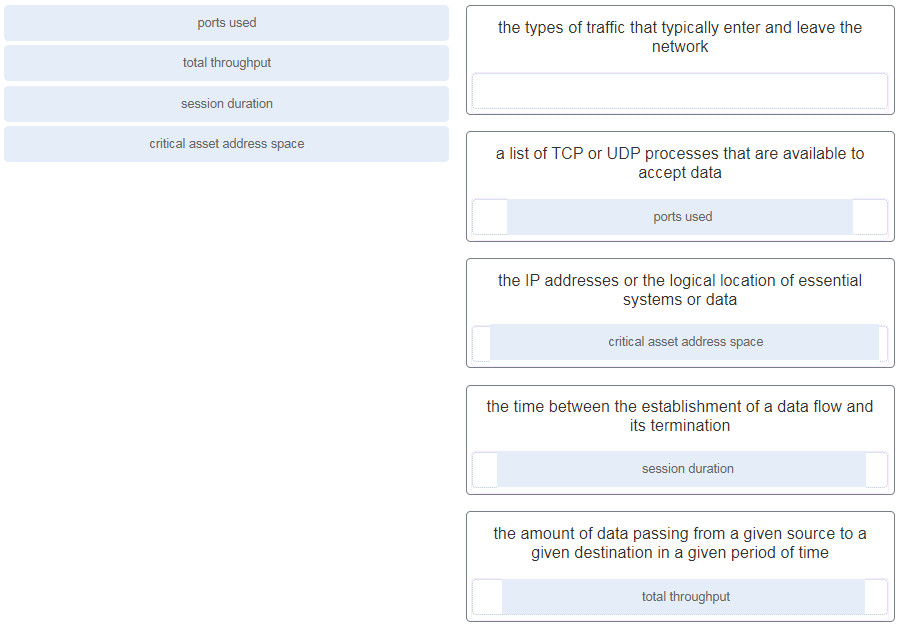 Explanation: Important elements of a network profile include:

36. Which technology is used by Cisco Advanced Malware Protection (AMP) in defending and protecting against known and emerging threats?

37. Which technique could be used by security personnel to analyze a suspicious file in a safe environment?

Explanation: Sandboxing allows suspicious files to be executed and analyzed in a safe environment. There are free public sandboxes that allow for malware samples to be uploaded or submitted and analyzed.

38. A company implements a security policy that ensures that a file sent from the headquarters office to the branch office can only be opened with a predetermined code. This code is changed every day. Which two algorithms can be used to achieve this task? (Choose two.)

Explanation: The task to ensure that only authorized personnel can open a file is data confidentiality, which can be implemented with encryption. AES and 3DES are two encryption algorithms. HMAC can be used for ensuring origin authentication. MD5 and SHA-1 can be used to ensure data integrity.

39. Which security management plan specifies a component that involves tracking the location and configuration of networked devices and software across an enterprise?

Explanation: Asset management involves tracking the location and configuration of networked devices and software across an enterprise.
0
Share FacebookTwitterGoogle+ReddItWhatsAppPinterestEmail