1. What is a feature of the tcpdump tool?

2. Which Windows tool can be used to review host logs?

3. Which type of security data can be used to describe or predict network behavior?

4. Which function is provided by the Sguil application?

Explanation: Applications such as Snorby and Sguil can be used to read and search alert messages generated by NIDS/NIPS.

5. Which ICMP message type should be stopped inbound?

Explanation: The echo ICMP packet should not be allowed inbound on an interface. The echo-reply should be allowed so that when an internal device pings an external device, the reply is allowed to return.

6. How can IMAP be a security threat to a company?

Explanation: IMAP, SMTP, and POP3 are email protocols. SMTP is used to send data from a host to a server or to send data between servers. IMAP and POP3 are used to download email messages and can be responsible for bringing malware to the receiving host.

Explanation: Bitcoin is used to share a distributed database or ledger. BitTorrent is used for file sharing.

8. Which protocol is exploited by cybercriminals who create malicious iFrames?

Explanation: An HTML element known as an inline frame or iFrame allows the browser to load a different web page from another source.

9. Which method is used by some malware to transfer files from infected hosts to a threat actor host?

Explanation: ICMP traffic from inside the company is also a threat. Some varieties of malware use ICMP packets to transfer files from infected hosts to threat actors via ICMP tunneling.

10. Why does HTTPS technology add complexity to network security monitoring?

11. Which approach is intended to prevent exploits that target syslog?

Explanation: Hackers may try to block clients from sending data to the syslog server, manipulate or erase logged data, or manipulate the software used to transmit messages between the clients and the server. Syslog-ng is the next generation of syslog and it contains improvements to prevent some of the exploits.

12. Which type of attack is carried out by threat actors against a network to determine which IP addresses, protocols, and ports are allowed by ACLs?

Explanation: Packet filtering ACLs use rules to filter incoming and outgoing traffic. These rules are defined by specifying IP addresses, port numbers, and protocols to be matched. Threat actors can use a reconnaissance attack involving port scanning or penetration testing to determine which IP addresses, protocols, and ports are allowed by ACLs.

13. Which two application layer protocols manage the exchange of messages between a client with a web browser and a remote web server? (Choose two.)

Explanation: Hypertext Transfer Protocol (HTTP) and HTTP Secure (HTTPS) are two application layer protocols that manage the content requests from clients and the responses from the web server. HTML (Hypertext Mark-up Language) is the encoding language that describes the content and display features of a web page. DNS is for domain name to IP address resolution. DHCP manages and provides dynamic IP configurations to clients.

15. Which Windows log contains information about installations of software, including Windows updates?

Explanation: On a Windows host, setup logs record information about the installation of software, including Windows updates.

16. Match the Windows host log to the messages contained in it. (Not all options are used.) 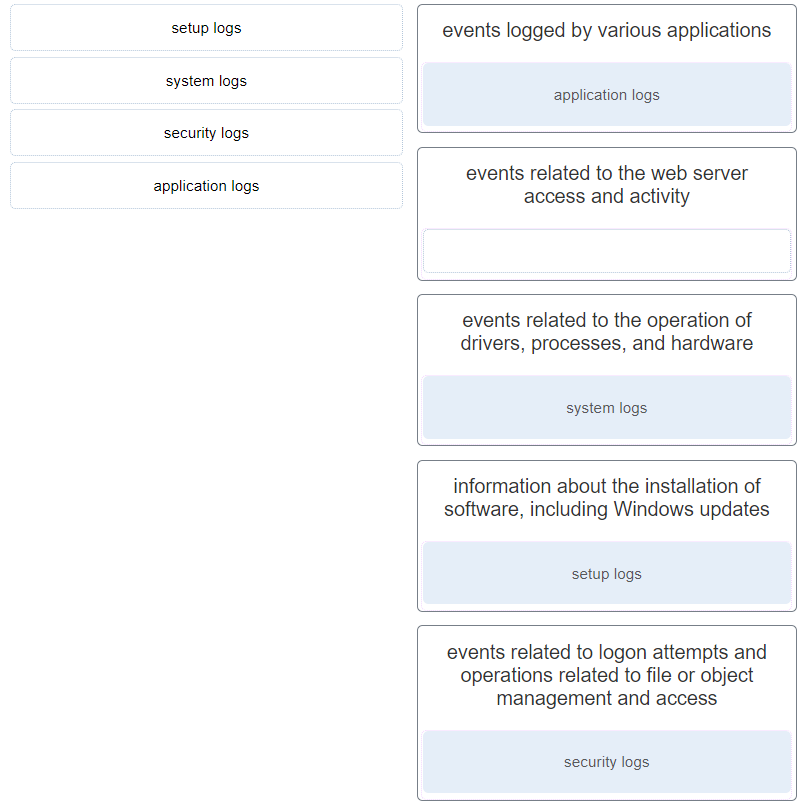 17. Which Cisco appliance can be used to filter network traffic contents to report and deny traffic based on the web server reputation?

18. Which technique would a threat actor use to disguise traces of an ongoing exploit?

Explanation: The Network Time Protocol (NTP) uses a hierarchy of time sources to provide a consistent time clock to network infrastructure devices. Threat actors may attack the NTP infrastructure in order to corrupt time information that is used in network logs.

19. A system administrator runs a file scan utility on a Windows PC and notices a file lsass.exe in the Program Files directory. What should the administrator do?

Explanation: On Windows computers, security logging and security policies enforcement are carried out by the Local Security Authority Subsystem Service (LSASS), running as lsass.exe. It should be running from the Windows\System32 directory. If a file with this name, or a camouflaged name, such as 1sass.exe, is running or running from another directory, it could be malware.

20. Refer to the exhibit. A network administrator is viewing some output on the Netflow collector. What can be determined from the output of the traffic flow shown?

Explanation: The traffic flow shown has a source port of 53 and a destination port of 1025. Port 53 is used for DNS and because the source port is 53, this traffic is responding to a client machine from a DNS server. The IP PROTOCOL is 17 and specifies that UDP is being used and the TCP flag is set to 0.

21 In a Cisco AVC system, in which module is NetFlow deployed?

Explanation: NetFlow technology is deployed in the Metrics Collection module of a Cisco AVC system to collect network flow metrics and to export to management tools.

22. What does it indicate if the timestamp in the HEADER section of a syslog message is preceded by a period or asterisk symbol?

Explanation: The HEADER section of the message contains the timestamp. If the timestamp is preceded by the period (.) or asterisk (*) symbols, a problem is indicated with NTP.

23. Which protocol is a name resolution protocol often used by malware to communicate with command-and-control (CnC) servers?

Explanation: Domain Name Service (DNS) is used to convert domain names into IP addresses. Some organizations have less stringent policies in place to protect against DNS-based threats than they have in place for other exploits.

24. Which technique is necessary to ensure a private transfer of data using a VPN?

25. Which technology would be used to create the server logs generated by network devices and reviewed by an entry level network person who works the night shift at a data center?

Explanation: Syslog is a daemon or service run on a server that accepts messages sent by network devices. These logs are frequently examined to detect inconsistencies and issues within the network.

28. Match the SIEM function with the description. 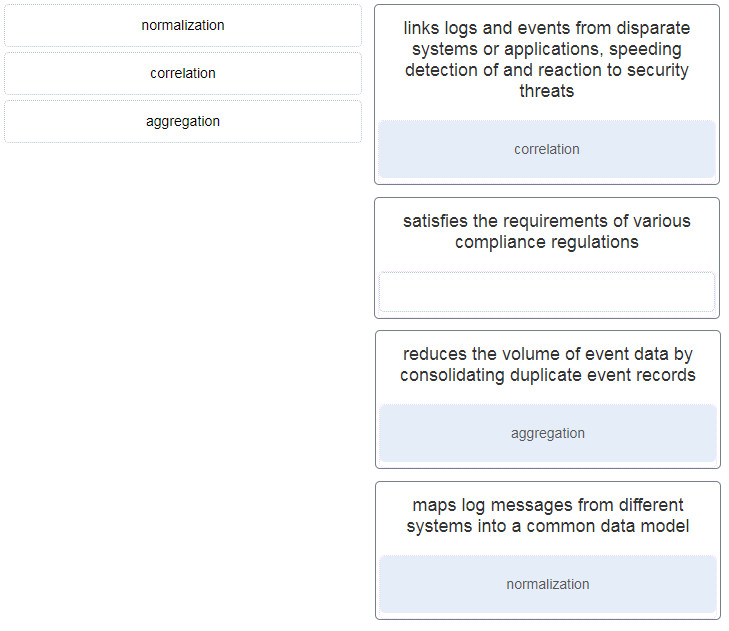 29. Which two tools have a GUI interface and can be used to view and analyze full packet captures? (Choose two.)

Explanation: The Network Analysis Module of the Cisco Prime Infrastructure system and Wireshark have GUI interfaces and can display full packet captures. The tcpdump tool is a command-line packet analyzer.

Explanation: Session data is a record of a conversation between two network endpoints.

32. How does a web proxy device provide data loss prevention (DLP) for an enterprise?

33. Which information can be provided by the Cisco NetFlow utility?