1. When a user makes changes to the settings of a Windows system, where are these changes stored?

2. Which user account should be used only to perform system management and not as the account for regular use?

3. What is the purpose of entering the netsh command on a Windows PC?

Explanation: The netsh.exe tool can be used to configure networking parameters for the PC from a command prompt.

4. Which type of Windows PowerShell command performs an action and returns an output or object to the next command that will be executed?

Explanation: The types of commands that PowerShell can execute include the following:

5. A user creates a file with .ps1 extension in Windows. What type of file is it?

6. What are two benefits of using an ext4 partition instead of ext3? (Choose two.)

Explanation: Based on the ex3 file system, an ext4 partition includes extensions that improve performance and an increase in the of supported files. An ext4 partition also supports journaling, a file system feature that minimizes the risk of file system corruption if power is suddenly lost to the system.

7. Consider the result of the ls -l command in the Linux output below. What are the file permissions assigned to the sales user for the analyst.txt file?

8. Which Linux command can be used to display the name of the current working directory?

9. Consider the result of the ls -l command in the Linux output below. What are the file permissions assigned to the sales user for the analyst.txt file?

10. A Linux system boots into the GUI by default, so which application can a network administrator use in order to access the CLI environment?

Explanation: A terminal emulator is an application program a user of Linux can use in order to access the CLI environment.

11. What is the well-known port address number used by DNS to serve requests?

Explanation: Port numbers are used in TCP and UDP communications to differentiate between the various services running on a device. The well-known port number used by DNS is port 53.

12. Which user can override file permissions on a Linux computer?

13. Match the commonly used ports on a Linux server with the corresponding service. 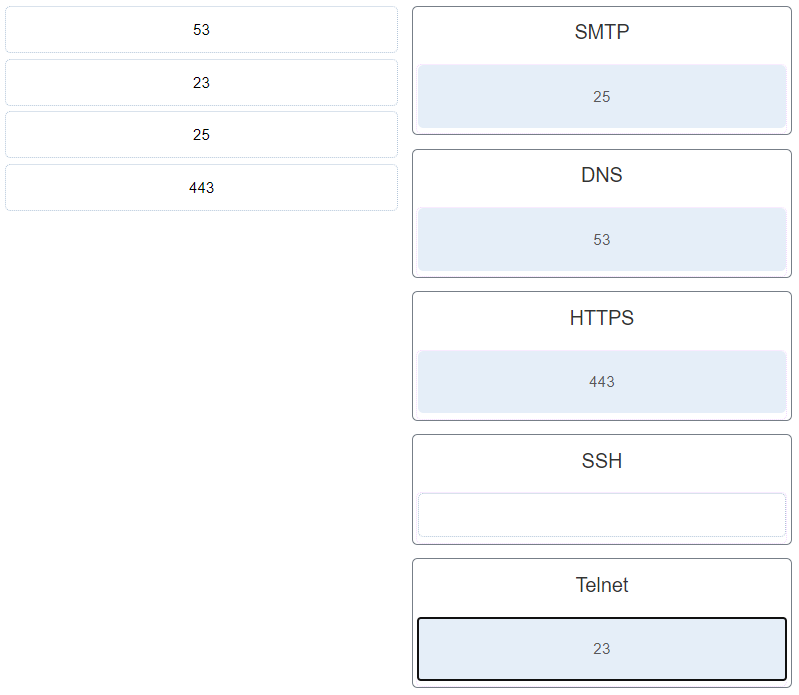 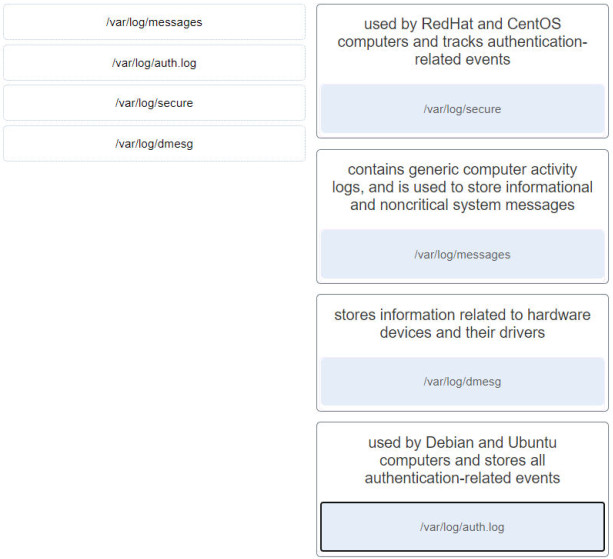 15. Which type of tool allows administrators to observe and understand every detail of a network transaction?

16. Match the Linux command to the function. (Not all options are used.) 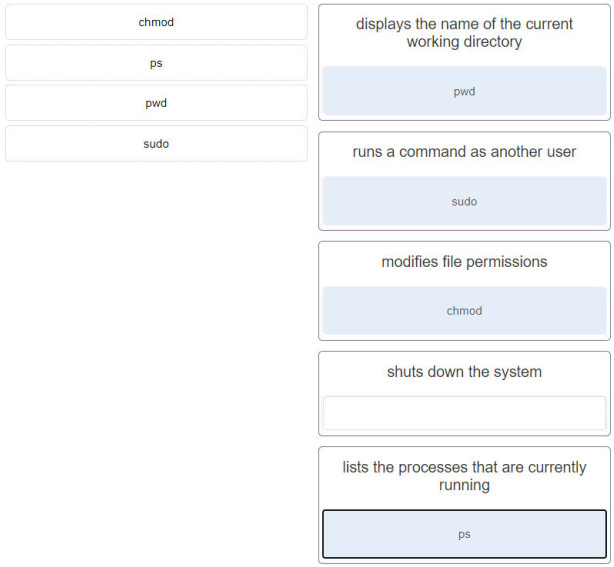 17. What are two advantages of the NTFS file system compared with FAT32? (Choose two.)

Explanation: The file system has no control over the speed of access or formatting of drives, and the ease of configuration is not file system-dependent.

18. Why is Kali Linux a popular choice in testing the network security of an organization?

Explanation: Kali is an open source Linux security distribution that is commonly used by IT professionals to test the security of networks.

19. Match the octal value to the file permission description in Linux. (Not all options are used.) 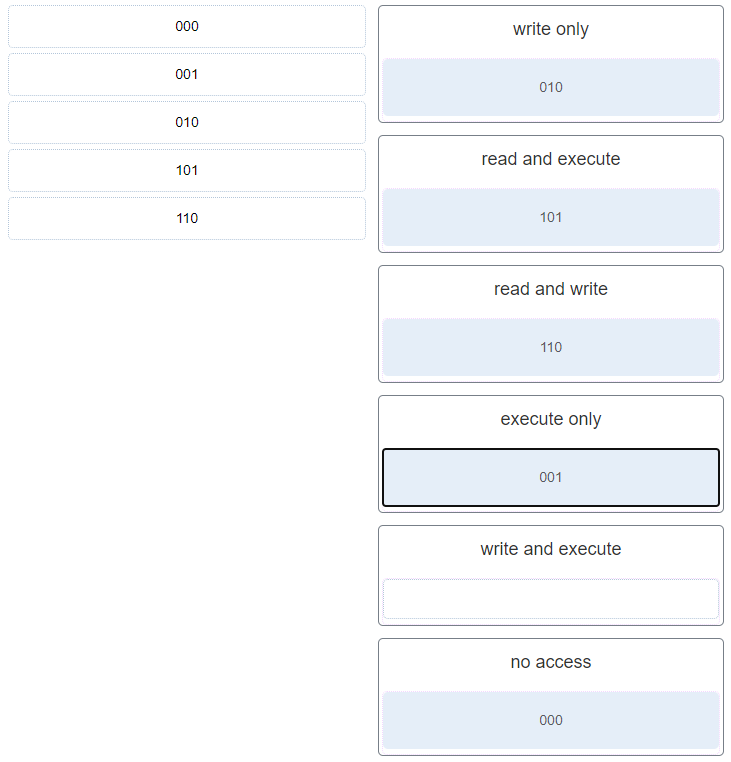 20. A PC user issues the netstat command without any options. What is displayed as the result of this command?

Explanation: When used by itself (without any options), the netstat command will display all the active TCP connections that are available.

21. Which two commands could be used to check if DNS name resolution is working properly on a Windows PC? (Choose two.)

Nslookup is a tool for testing and troubleshooting DNS servers.

22. A technician has installed a third party utility that is used to manage a Windows 7 computer. However, the utility does not automatically start whenever the computer is started. What can the technician do to resolve this problem?

23. Which statement describes the function of the Server Message Block (SMB) protocol?

24. What is the purpose of using the net accounts command in Windows?

Explanation: These are some common net commands:
net accounts – sets password and logon requirements for users
net start – starts a network service or lists running network services
net use – connects, disconnects, and displays information about shared network resources
net view – shows a list of computers and network devices on the network
When used without options, the net accounts command displays the current settings for password, logon limitations, and domain information. 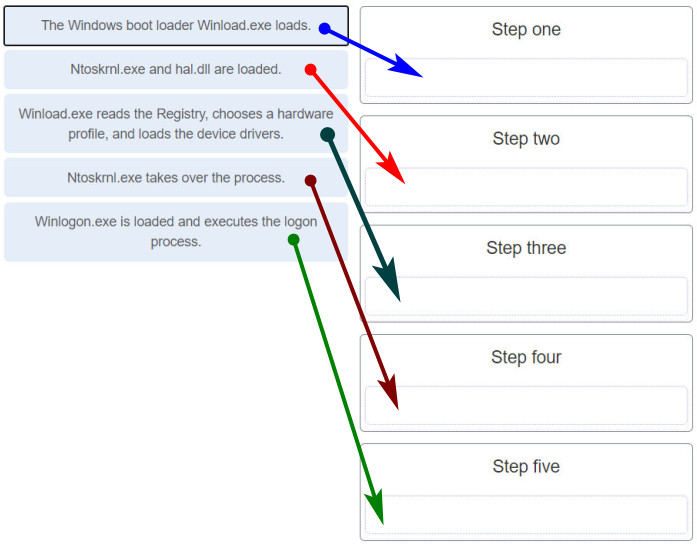 26. A user creates a file with .ps1 extension in Windows. What type of file is it?

Explanation: The types of commands that PowerShell can execute include the following:

27. A user logs in to Windows with a regular user account and attempts to use an application that requires administrative privileges. What can the user do to successfully use the application?

Explanation: As a security best practice, it is advisable not to log on to Windows using the Administrator account or an account with administrative privileges. When it is necessary to run or install software that requires the privileges of the Administrator, the user can right-click the software in the Windows File Explorer and choose Run as Administrator .

28. An IT technician wants to create a rule on two Windows 10 computers to prevent an installed application from accessing the public Internet. Which tool would the technician use to accomplish this task?

29. Match the Windows command to the description.

30. What technology was created to replace the BIOS program on modern personal computer motherboards?

Explanation: As of 2015, most personal computer motherboards are shipped with UEFI as the replacement for the BIOS program.

31. Match the Linux system component with the description. (Not all options are used.) 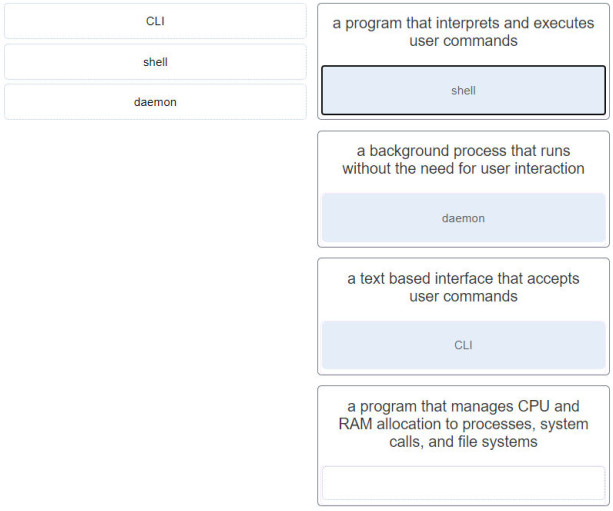 32. What is the outcome when a Linux administrator enters the man man command?

33. Match the description to the Linux term. (Not all options are used.) 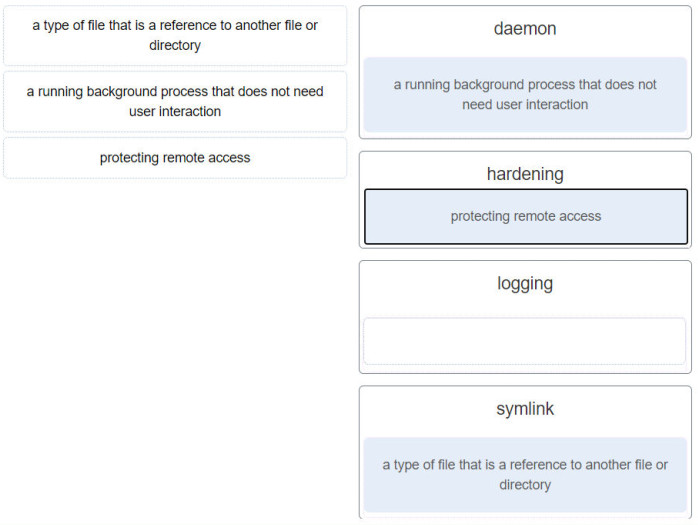 34. Why is Linux considered to be better protected against malware than other operating systems?

Explanation: The Linux operating design including how the file system is structured, standard file permissions, and user account restrictions make Linux a better protected operating system. However, Linux still has vulnerabilities and can have malware installed that affects the operating system.

35. Match the commonly used ports on a Linux server with the corresponding service. (Not all options are used.) 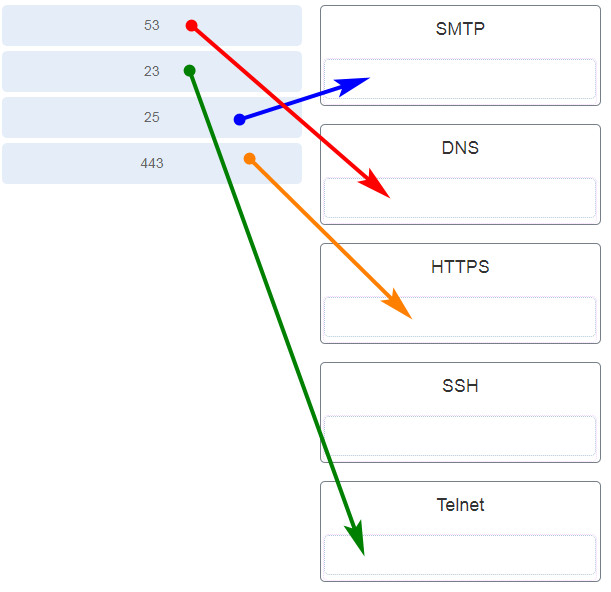 36. Match the Windows system tool with the description. (Not all options are used.) 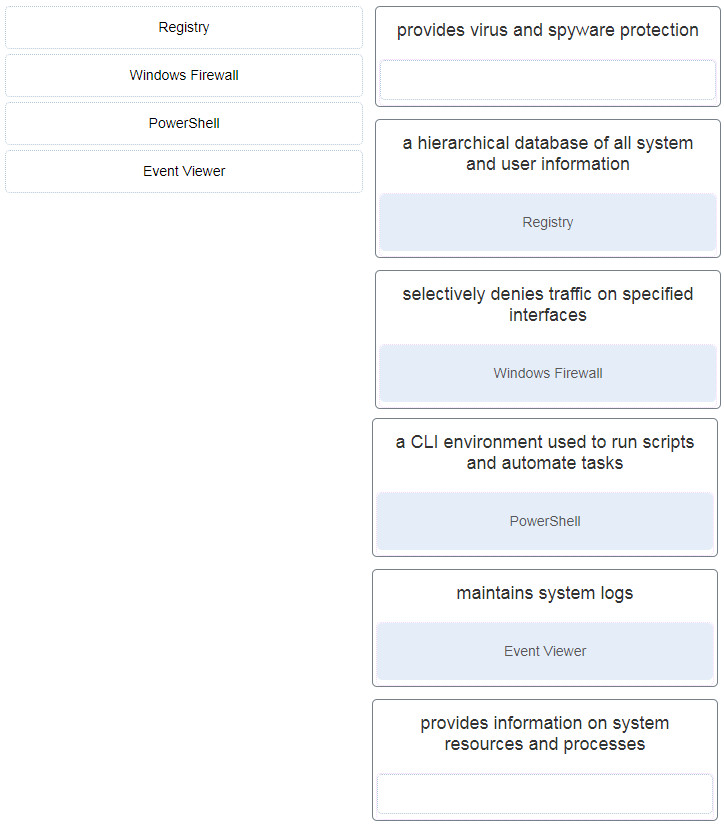 37. In the Linux shell, which character is used between two commands to instruct the shell to combine and execute these two commands in sequence?

Explanation: In the Linux shell, several commands can be combined to perform a complex task. This technique is known as piping. The piping process is indicated by inserting the character “|” between two consecutive commands.

38. Which Windows tool can be used by a cybersecurity administrator to secure stand-alone computers that are not part of an active directory domain?

Explanation: Windows systems that are not part of an Active Directory Domain can use the Windows Local Security Policy to enforce security settings on each stand-alone system.

39. Why would a network administrator choose Linux as an operating system in the Security Operations Center (SOC)?

Explanation: There are several reasons why Linux is a good choice for the SOC.
Linux is open source.
The command line interface is a very powerful environment.
The user has more control over the operating system.
Linux allows for better network communication control.

40. Which two methods can be used to harden a computing device? (Choose two.)