1. A host is transmitting a broadcast. Which host or hosts will receive it?

2. Which statement describes a characteristic of cloud computing?

3. A network administrator can successfully ping the server at www.cisco.com, but cannot ping the company web server located at an ISP in another city. Which tool or command would help identify the specific router where the packet was lost or delayed?

4. What type of information is contained in an ARP table?

Explanation: ARP tables are used to store mappings of IP addresses to MAC addresses. When a network device needs to forward a packet, the device knows only the IP address. To deliver the packet on an Ethernet network, a MAC address is needed. ARP resolves the MAC address and stores it in an ARP table.

5. Match the characteristic to the protocol category. (Not all options are used.) 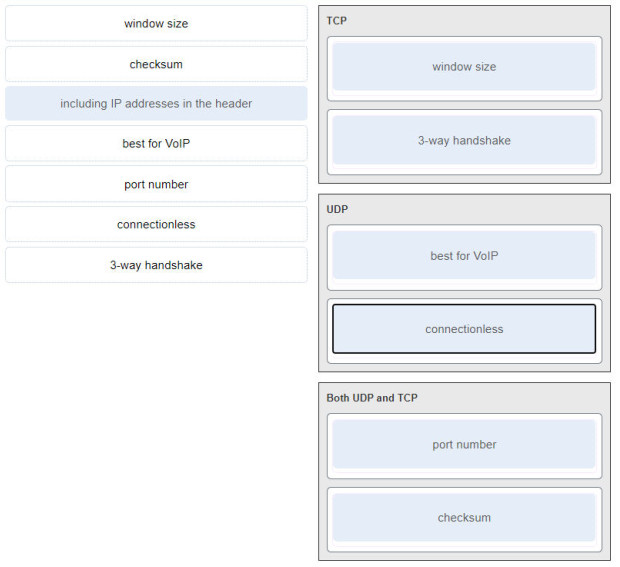 Both UDP and TCP:

Explanation: TCP uses 3-way handshaking as part of being able to provide reliable communication and window size to provide data flow control. UDP is a connectionless protocol that is great for video conferencing. Both TCP and UDP have port numbers to distinguish between applications and application windows and a checksum field for error detection.

6. When a wireless network in a small office is being set up, which type of IP addressing is typically used on the networked devices?

Explanation: In setting up the wireless network in a small office, it is a best practice to use private IP addressing because of the flexibility and easy management it offers.

7. Which two parts are components of an IPv4 address? (Choose two.)

8. Match each IPv4 address to the appropriate address category. (Not all options are used.) 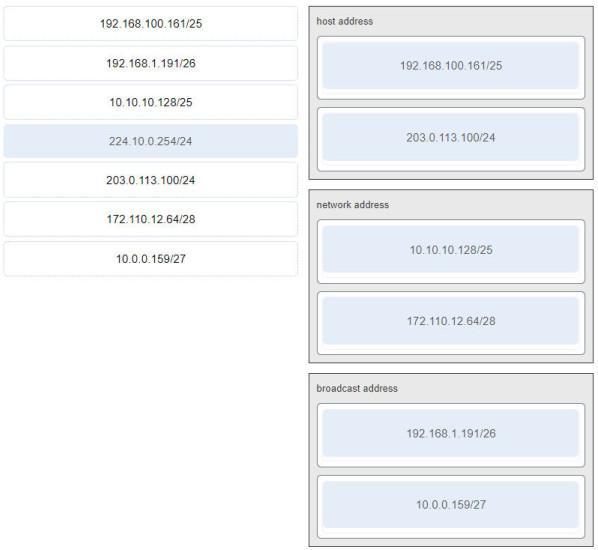 Explanation: ARP is a protocol used with IPv4 to map a MAC address to an associated specific IP address. The command arp -a will display the MAC address table on a Windows PC.

10. A user sends an HTTP request to a web server on a remote network. During encapsulation for this request, what information is added to the address field of a frame to indicate the destination?

11. What addresses are mapped by ARP?

12. What type of information is contained in a DNS MX record?

Explanation: MX, or mail exchange messages, are used to map a domain name to several mail exchange servers that all belong to the same domain.

13. Match the application protocols to the correct transport protocols. 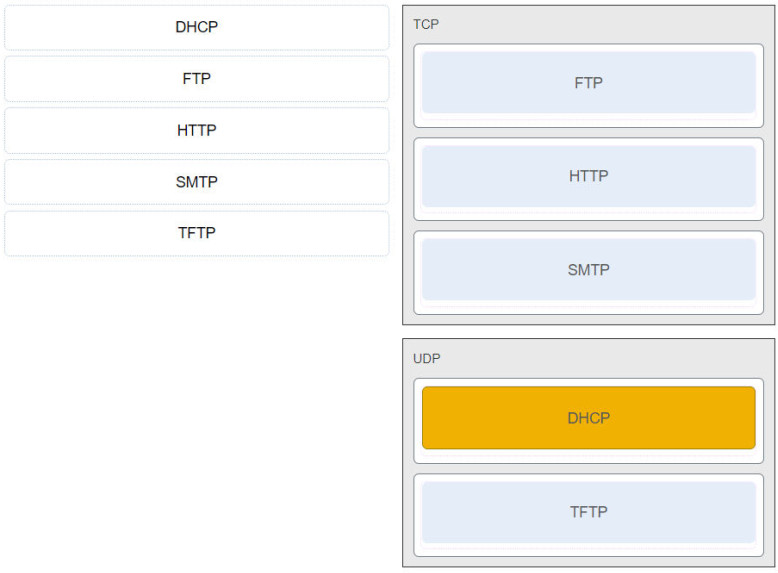 14. A PC is downloading a large file from a server. The TCP window is 1000 bytes. The server is sending the file using 100-byte segments. How many segments will the server send before it requires an acknowledgment from the PC?

16. Which two commands can be used on a Windows host to display the routing table? (Choose two.)

19. What message informs IPv6 enabled interfaces to use stateful DHCPv6 for obtaining an IPv6 address?

Explanation: Before an IPv6 enabled interface will use stateful DHCPv6 to obtain an IPv6 address, the interface must receive an ICMPv6 Router Advertisement with the managed configuration flag (M flag) set to 1.

21. Match each characteristic to the appropriate email protocol. (Not all options are used.) 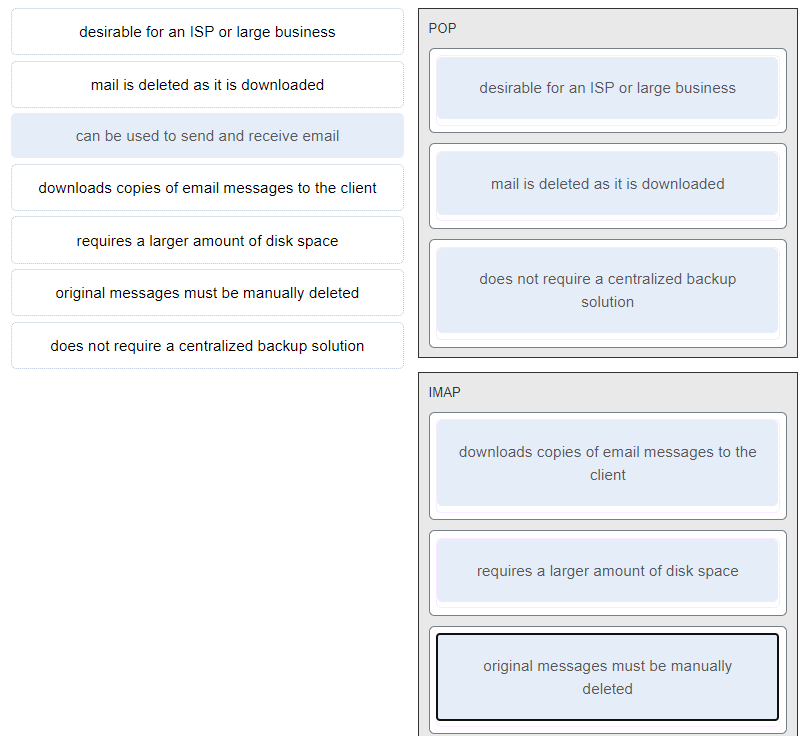 22. What is done to an IP packet before it is transmitted over the physical medium?

Explanation: When messages are sent on a network, the encapsulation process works from the top of the OSI or TCP/IP model to the bottom. At each layer of the model, the upper layer information is encapsulated into the data field of the next protocol. For example, before an IP packet can be sent, it is encapsulated in a data link frame at Layer 2 so that it can be sent over the physical medium.

23. Which PDU is processed when a host computer is de-encapsulating a message at the transport layer of the TCP/IP model?

Explanation: At the transport layer, a host computer will de-encapsulate a segment to reassemble data to an acceptable format by the application layer protocol of the TCP/IP model.

14. What is the purpose of ICMP messages?

25. Match the HTTP status code group to the type of message generated by the HTTP server. 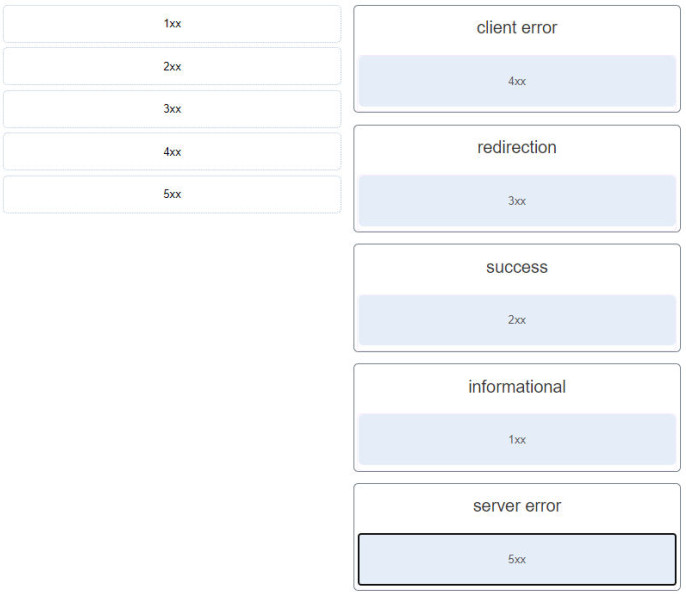 Explanation: WHOIS is a TCP-based protocol that is used to identify the owners of internet domains through the DNS system.

27. What action does a DHCPv4 client take if it receives more than one DHCPOFFER from multiple DHCP servers?

Explanation: If there are multiple DHCP servers in a network, it is possible for a client to receive more than one DHCPOFFER. In this scenario, the client will only send one DHCPREQUEST, which includes the server from which the client is accepting the offer.

28. Which networking model is being used when an author uploads one chapter document to a file server of a book publisher?

29. Which protocol is a client/server file sharing protocol and also a request/response protocol?

Explanation:The Server Message Block (SMB) is a client/server file sharing protocol that describes the structure of shared network resources such as directories, files, printers, and serial ports. SMB is also a request/response protocol.

30. How is a DHCPDISCOVER transmitted on a network to reach a DHCP server?

31. What is a description of a DNS zone transfer?

Explanation: When a server requires data for a zone, it will request a transfer of that data from an authoritative server for that zone. The process of transferring blocks of DNS data between servers is known as a zone transfer.

32. What are the two sizes (minimum and maximum) of an Ethernet frame? (Choose two.)

33. A user who is unable to connect to the file server contacts the help desk. The helpdesk technician asks the user to ping the IP address of the default gateway that is configured on the workstation. What is the purpose for this ping command?

Explanation: The ping command is used to test connectivity between hosts. The other options describe tasks not performed by ping . Pinging the default gateway will test whether the host has the capability to reach hosts on its own network and on other networks.

Explanation: As user traffic from behind an ISP firewall reaches the gateway device, Network Address Translation changes private IP addresses into a public, routable IP address. Private user addresses remain hidden from the public Internet, and thus more than one user can have the same private IP address, regardless of ISP.

36. What are the three ranges of IP addresses that are reserved for internal private use? (Choose three.)

38. Which statement describes a feature of the IP protocol?

Explanation: IP protocol is a connection-less protocol, considered unreliable in terms of end-to-end delivery. It does not provide error control in the cases where receiving packets are out-of-order or in cases of missing packets. It relies on upper layer services, such as TCP, to resolve these issues.

39. What is a basic characteristic of the IP protocol?

40. Which statement describes the ping and tracert commands?

41. A large corporation has modified its network to allow users to access network resources from their personal laptops and smart phones. Which networking trend does this describe?

42. Match each description to its corresponding term. (Not all options are used.) 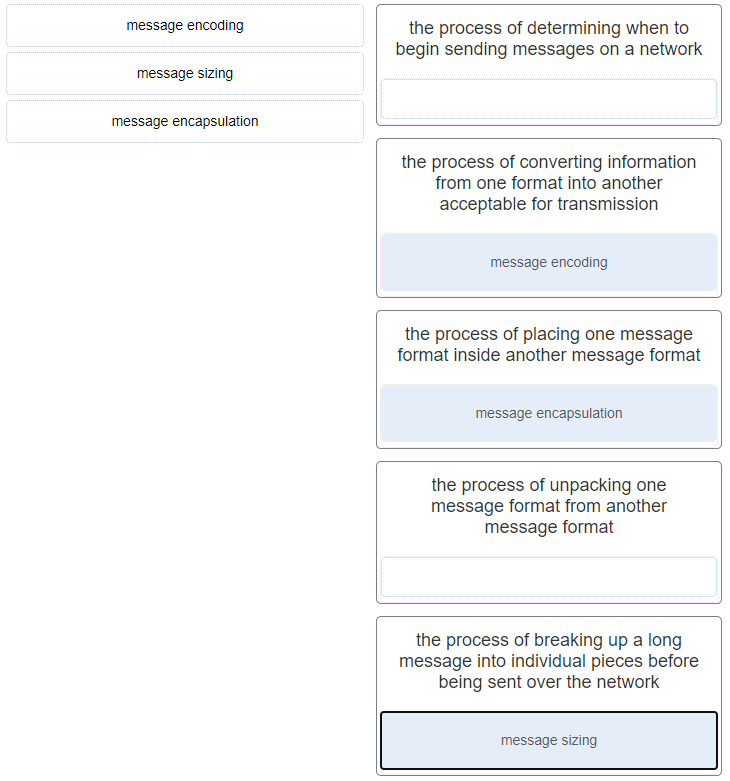 43. Which method would an IPv6-enabled host using SLAAC employ to learn the address of the default gateway?

44. Which type of transmission is used to transmit a single video stream such as a web-based video conference to a select number of users?

45. Refer to the exhibit. PC1 attempts to connect to File_server1 and sends an ARP request to obtain a destination MAC address. Which MAC address will PC1 receive in the ARP reply? 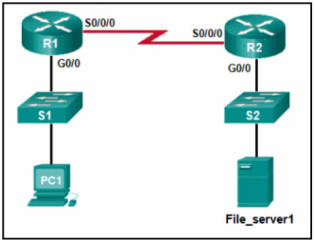 46. What is the result of an ARP poisoning attack?

47. What is the function of the HTTP GET message?

48. Refer to the exhibit. This PC is unable to communicate with the host at 172.16.0.100. What information can be gathered from the displayed output?

Explanation: The tracert command shows the path a packet takes through the network to the destination. In this example, only a response from the first router in the path is received, and all other responses time out. The first router is the default gateway for this host, and because a response is received from the router, it can be assumed that this host is on the same subnet as the router.

50. Which two operations are provided by TCP but not by UDP? (Choose two.)

Explanation: Numbering and tracking data segments, acknowledging received data, and retransmitting any unacknowledged data are reliability operations to ensure that all of the data arrives at the destination. UDP does not provide reliability. Both TCP and UDP identify the applications and track individual conversations. UDP does not number data segments and reconstructs data in the order that it is received.

51. A user is executing a tracert to a remote device. At what point would a router, which is in the path to the destination device, stop forwarding the packet?

Explanation: When a router receives a traceroute packet, the value in the TTL field is decremented by 1. When the value in the field reaches zero, the receiving router will not forward the packet, and will send an ICMP Time Exceeded message back to the source.

52. A network administrator is testing network connectivity by issuing the ping command on a router. Which symbol will be displayed to indicate that a time expired during the wait for an ICMP echo reply message?

53. A technician is configuring email on a mobile device. The user wants to be able to keep the original email on the server, organize it into folders, and synchronize the folders between the mobile device and the server. Which email protocol should the technician use?

54. At which OSI layer is a source MAC address added to a PDU during the encapsulation process?

55. Which value, that is contained in an IPv4 header field, is decremented by each router that receives a packet?

Explanation: When a router receives a packet, the router will decrement the Time-to-Live (TTL) field by one. When the field reaches zero, the receiving router will discard the packet and will send an ICMP Time Exceeded message to the sender.

56. What are three responsibilities of the transport layer? (Choose three.)

Explanation: Network scanning can help a network administrator strengthen the security of the network and systems by identifying open TCP and UDP ports that could be targets of an attack.

58. Refer to the exhibit. A network security analyst is examining captured data using Wireshark. The captured frames indicate that a host is downloading malware from a server. Which source port is used by the host to request the download?

Explanation: During the TCP three-way handshake process, the output shows that the host uses source port 48598 to initiate the connection and request the download.

59. What are three responsibilities of the transport layer? (Choose three.)

60. Which two ICMP messages are used by both IPv4 and IPv6 protocols? (Choose two.)​

61. What mechanism is used by a router to prevent a received IPv4 packet from traveling endlessly on a network?

Explanation: The default gateway is the address of the device a host uses to access the Internet or another network. If the default gateway is missing or incorrect, that host will not be able to communicate outside the local network. Because the host can access other hosts on the local network, the network cable and the other parts of the IP configuration are working.

65. Refer to the exhibit. PC1 issues an ARP request because it needs to send a packet to PC3. In this scenario, what will happen next? 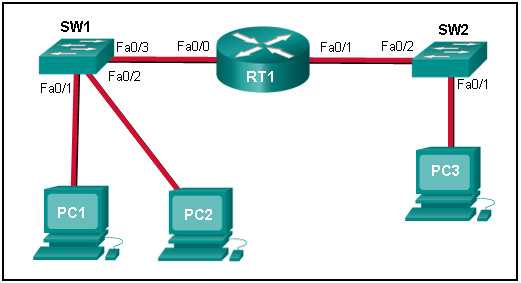