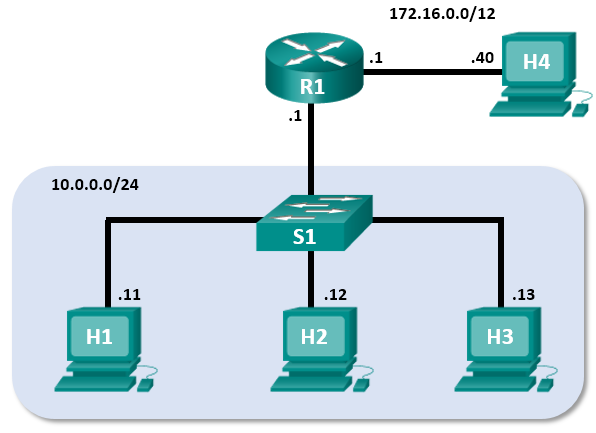 The CyberOps VM includes a Python script that, when you run it, will set up and configure the devices shown in the figure above. You will then have access to four hosts, a switch, and a router inside your one VM. This will allow you to simulate a variety of network protocols and services without having to configure a physical network of devices. For example, in this lab you will use the ping command between two hosts in the Mininet Topology and capture those pings with Wireshark.

Wireshark is a software protocol analyzer, or “packet sniffer” application, used for network troubleshooting, analysis, software and protocol development, and education. As data streams travel over the network, the sniffer “captures” each protocol data unit (PDU) and can decode and analyze its content according to the appropriate RFC or other specifications.

Wireshark is a useful tool for anyone working with networks for data analysis and troubleshooting. You will use Wireshark to capture ICMP data packets.

In this part, you will use a Python script to set up the Mininet Topology inside the CyberOps VM. You will then record the IP and MAC addresses for H1 and H2.

Start and log into your CyberOps Workstation that you have installed in a previous lab using the following credentials:

Step 2: Run the Python script to install the Mininet Topology.

Open a terminal emulator to start Mininet and enter the following command at the prompt. When prompted, enter cyberops as the password.

Step 3: Record IP and MAC addresses for H1 and H2.

a. At the mininet prompt, start terminal windows on hosts H1 and H2. This will open separate windows for these hosts. Each host will have a separate configuration for the network including unique IP and MAC addresses.

In this part, you will ping between two hosts in the Mininet and capture ICMP requests and replies in Wireshark. You will also look inside the captured PDUs for specific information. This analysis should help to clarify how packet headers are used to transport data to the destination.

Step 1: Examine the captured data on the same LAN.

In this step, you will examine the data that was generated by the ping requests of your team member’s PC. Wireshark data is displayed in three sections: 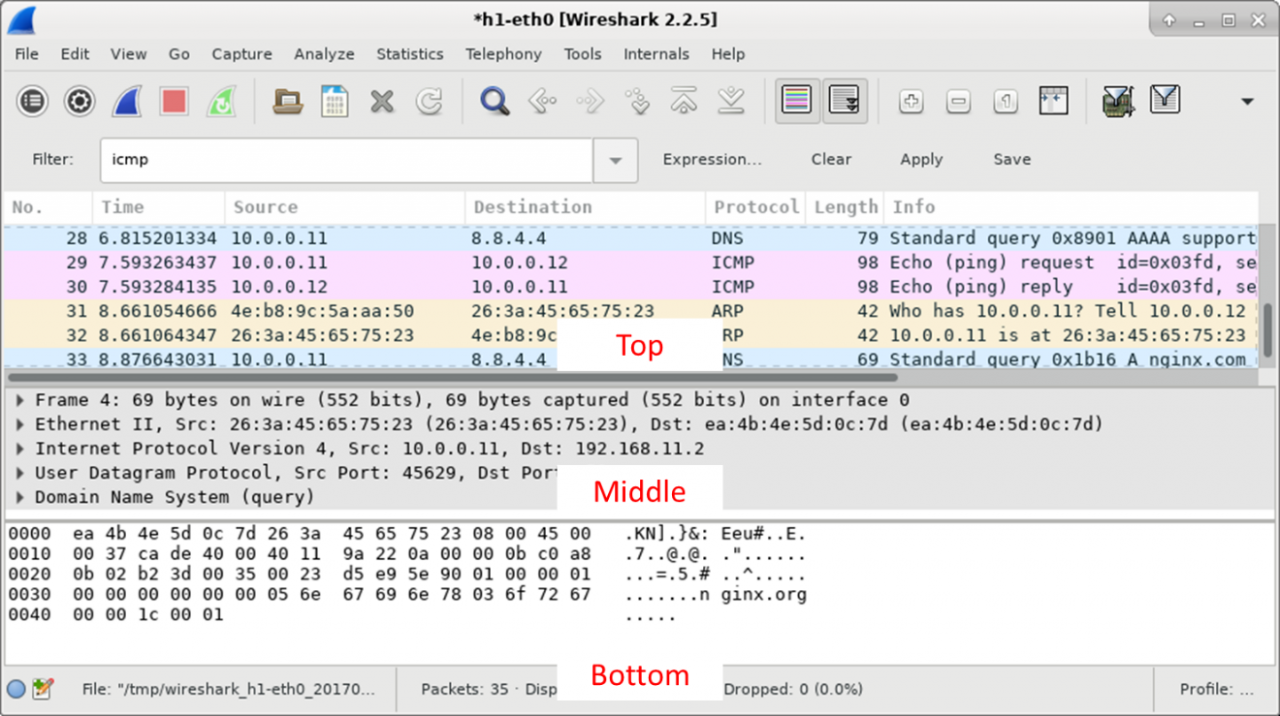 a. On Node: H1, enter wireshark & to start Wireshark (The pop-up warning is not important for this lab.). Click OK to continue.

b. In the Wireshark window, under the Capture heading, select the H1-eth0 interface. Click Start to capture the data traffic.

c. On Node: H1, press the Enter key, if necessary, to get a prompt. Then type ping -c 5 10.0.0.12 to ping H2 five times. The command option -c specifies the count or number of pings. The 5 specifies that five pings should be sent. The pings will all be successful.

d. Navigate to the Wireshark window, click Stop to stop the packet capture.

e. A filter can be applied to display only the interested traffic.

Type icmp in the Filter field and click Apply.

f. If necessary, click the first ICMP request PDU frames in the top section of Wireshark. Notice that the Source column has H1’s IP address, and the Destination column has H2’s IP address.

g. With this PDU frame still selected in the top section, navigate to the middle section. Click the arrow to the left of the Ethernet II row to view the Destination and Source MAC addresses.

Note: In the preceding example of a captured ICMP request, ICMP data is encapsulated inside an IPv4 packet PDU (IPv4 header) which is then encapsulated in an Ethernet II frame PDU (Ethernet II header) for transmission on the LAN.

Step 2: Examine the captured data on the remote LAN.

You will ping remote hosts (hosts not on the LAN) and examine the generated data from those pings. You will then determine what is different about this data from the data examined in Part 1.

a. At the mininet prompt, start terminal windows on hosts H4 and R1.

b. At the prompt on Node: H4, enter ip address to verify the IPv4 address and record the MAC address. Do the same for the Node: R1.

c. Start a new Wireshark capture on H1 by selecting Capture > Start. You can also click the Start button or type Ctrl-E Click Continue without Saving to start a new capture.

d. H4 is a simulated remote server. Ping H4 from H1. The ping should be successful.

MAC address: This will be associated with the R1-eth1 interface, which is the default gateway for the hosts H1, H2, and H3 in this LAN.

g. To clean up all the processes that were used by Mininet, enter the sudo mn -c command at the prompt.