1. For which discovery mode will an AP generate the most traffic on a WLAN?

2. Which parameter is commonly used to identify a wireless network name when a home wireless AP is being configured?

4. Which AAA component can be established using token cards?

5. Which statement describes a VPN?

6. What is an advantage of HIPS that is not provided by IDS?

Explanation: Network-based IDS (NIDS) sensors are typically deployed in offline mode. They do not protect individual hosts. Host-based IPS (HIPS) is software installed on a single host to monitor and analyze suspicious activity. It can monitor and protect operating system and critical system processes that are specific to that host. HIPS can be thought of as a combination of antivirus software, antimalware software, and a firewall.

7. Which statement describes a difference between RADIUS and TACACS+?

8. What are two disadvantages of using an IDS? (Choose two.)

Explanation: The disadvantage of operating with mirrored traffic is that the IDS cannot stop malicious single-packet attacks from reaching the target before responding to the attack. Also, an IDS often requires assistance from other networking devices, such as routers and firewalls, to respond to an attack. An advantage of an IDS is that by working offline using mirrored traffic, it has no impact on traffic flow.

9. Which statement describes one of the rules that govern interface behavior in the context of implementing a zone-based policy firewall configuration?

10. Which technique is necessary to ensure a private transfer of data using a VPN?

11. Which two devices would commonly be found at the access layer of the hierarchical enterprise LAN design model? (Choose two.)

Explanation: While some designs do route at the access layer, the two devices that should always be placed at the access layer of the hierarchical design model are an access point and a Layer 2 switch. A modular switch is commonly used at the core layer. Routing by a Layer 3 device is commonly used in the distribution layer. The firewall is a device in the Internet edge network design.

12. Which two statements are true about NTP servers in an enterprise network? (Choose two.)

Explanation: Network Time Protocol (NTP) is used to synchronize the time across all devices on the network to make sure accurate timestamping on devices for managing, securing and troubleshooting. NTP networks use a hierarchical system of time sources. Each level in this hierarchical system is called a stratum. The stratum 1 devices are directly connected to the authoritative time sources.

13. In the data gathering process, which type of device will listen for traffic, but only gather traffic statistics?

15. What is the function of the distribution layer of the three-layer network design model?

Explanation: The function of the distribution layer is to provide connectivity to services and to aggregate the access layer connections

Explanation: The Cisco Web Security Appliance is a secure web gateway which combines advanced malware protection, application visibility and control, acceptable use policy controls, reporting, and secure mobility functions. With traditional web security appliances, these functions are typically provided through multiple appliances. It is not a firewall appliance in that it only filters web traffic. It does not provide VPN connections, nor does it provide email virus and spam filtering; the Cisco Email Security Appliance provides these functions.

17. What are two types of addresses found on network end devices? (Choose two.)

Explanation: Intermediary devices use two types of addresses when sending messages to the final destination device, MAC and IP addresses. TCP and UDP are protocols used at Layer 4 to identify what port numbers are being used on the source and destination devices. A return address is used when mailing a letter, not in networking.

18. What is a characteristic of the WLAN passive discover mode?

Explanation: In passive mode, the wireless clients learn what networks and APs are available. The client learns this information from beacon frames, sent by the APs, that contain the WLAN SSID, supported standards, and security settings.

19. What is a characteristic of a routed port that is configured on a Cisco switch?

Explanation: Routed ports on a Cisco switch behave similarly to those on a router. They are configured with an IP address and forward Layer 3 packets. Unlike Layer 2 switch interfaces, routed ports do not support STP, nor do they support subinterfaces as routers do.

20. What action does an Ethernet switch take when it receives a frame with an unknown Layer 2 source address?

Explanation: When an Ethernet switch receives a frame with an unknown Layer 2 address, the switch records that address in the address table.

21.. Match each device to a category. 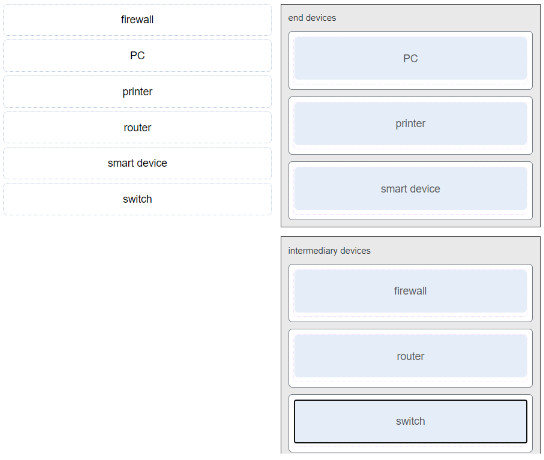 22. What is a host-based intrusion detection system (HIDS)?

Explanation:Accurrent HIDS is a comprehensive security application that combines the functionalities of antimalware applications with firewall protection. An HIDS not only detects malware but also prevents it from executing.
Because the HIDS runs directly on the host, itis considered an agent-based system.

23. What type of route is created when a network administrator manually configures a route that has an active exit interface?

Explanation: A static route is one that is manually configured by the network administrator.

24. Which characteristic describes a wireless client operating in active mode?

25. Which routing protocol is used to exchange routes between internet service providers?

Explanation: BGP is a path vector routing protocol and it is used by internet service providers to exchange routes.

26. What is the first step in the CSMA/CA process when a wireless client is attempting to communicate on the wireless network?

Explanation: When a wireless client is attempting to communicate on the network, it will first listen to the channel to be sure it is idle. Next, the client sends an RTS message to the AP to request dedicated access to the network. The AP will then send a CTS message granting access to the client. The client will then transmit data.

27. What Wi-Fi management frame is regularly broadcast by APs to announce their presence?

Explanation: Beacon frames are broadcast periodically by the AP to advertise its wireless networks to potential clients. Probing, association, and authentication frames are only sent when a client is associating to the AP.

28. What are the three parts of all Layer 2 frames? (Choose three.)

Explanation: Layer 2 frames have three components: the header, the payload, and a frame check sequence at the end.

29. What is the first step in the CSMA/CA process when a wireless client is attempting to communicate on the wireless network?

Explanation: When a wireless client is attempting to communicate on the network, it will first listen to the channel to be sure it is idle. Next, the client sends an RTS message to the AP to request dedicated access to the network. The AP will then send a CTS message granting access to the client. The client will then transmit data.

30. In which memory location is the routing table of a router maintained?

Explanation: In a wireless deployment that is using lightweight access points (LWAPs), the LWAP forwards data between the wireless clients and the wireless LAN controller (WLC).

32. A Cisco router is running IOS 15. What are the two routing table entry types that will be added when a network administrator brings an interface up and assigns an IP address to the interface? (Choose two.)

Explanation: A local route interface routing table entry is found when a router runs IOS 15 or higher or if IPv6 routing is enabled. Whenever an interface is addressed and enabled (made active), a directly connected interface is automatically shown in the routing table.

33. Match the secunty service with the description. 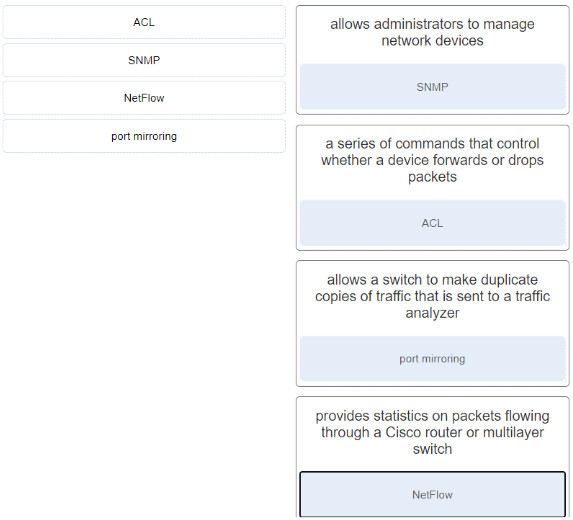 34. Match the network security device type with the descnption. 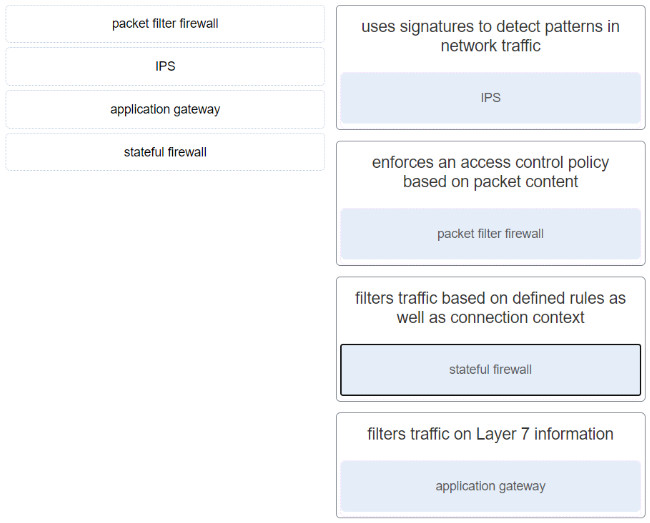 35. What Wi-Fi management frame is regularly broadcast by APs to announce their presence?

Explanation: Beacon frames are broadcast periodically by the AP to advertise its wireless networks to potential clients. Probing, association, and authentication frames are only sent when a client is associating to the AP.

Explanation: SNMP is an application layer protocol that allows administrators to manage devices on the network by providing a messaging format for communication between network device managers and agents.

37. What is a characteristic of a hub?

Explanation: A hub is a Layer 1 device that regenerates signals out all ports other than the ingress port. All ports on a hub belong to the same collision domain. Hubs use CSMA/CD to detect collisions on the network.

38. Match the network security device type with the description. 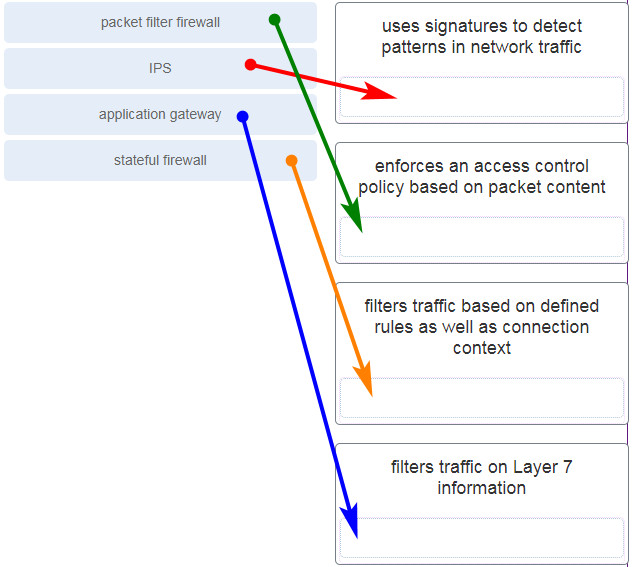 39. Which firewall feature is used to ensure that packets coming into a network are legitimate responses to requests initiated from internal hosts?

40. What is used on WLANs to avoid packet collisions?

Explanation: WLANs are half-duplex networks which means that only one client can transmit or receive at any given moment. WLANs use carrier sense multiple access with collision avoidance (CSMA/CA) to determine when to send data on the network to avoid packet collisions.

41. What information within a data packet does a router use to make forwarding decisions?

Explanation: A Layer 3 device like a router uses a Layer 3 destination IP address to make a forwarding decision.
0
Share FacebookTwitterGoogle+ReddItWhatsAppPinterestEmail