1. When real-time reporting of security events from multiple sources is being received, which function in SIEM provides capturing and processing of data in a common format?

2. What is the value of file hashes to network security investigations?

3. Which technology is an open source SIEM system?

4. A threat actor has successfully breached the network firewall without being detected by the IDS system. What condition describes the lack of alert?

Explanation: A false negative is where no alert exists and exploits are not being detected by the security systems that are in place.

5. What information is contained in the options section of a Snort rule?

6. Match the intrusion event defined in the Diamond Model of intrusion to the description. 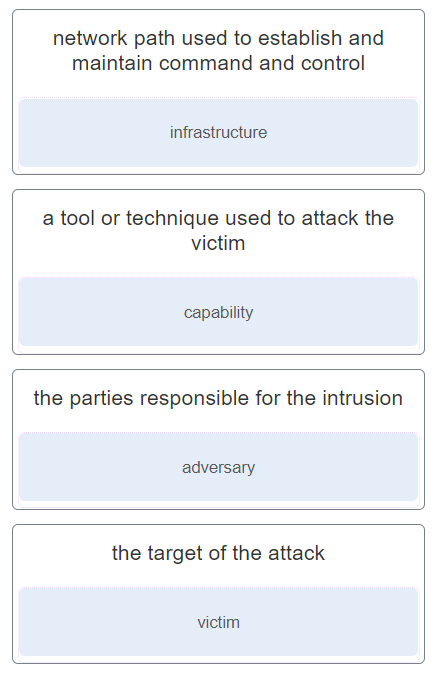 7. What two shared sources of information are included within the MITRE ATT&CK framework? (Choose two.)

Explanation: The MITRE Framework uses stored information on attacker tactics, techniques, and procedures (TTP) as part of threat defense and attack attribution. This is done by mapping the steps in an attack to a matrix of generalized tactics and describing the techniques that are used in each tactic. These sources of information create models that assist in the ability to attribute a threat.

8. What information is gathered by the CSIRT when determining the scope of a security incident?

Explanation: The scoping activity performed by the CSIRT after an incident determines which networks, systems, or applications are affected; who or what originated the incident; and how the incident is occurring.

Explanation: The management team creates the policies, designs the budget, and is in charge of staffing all departments. Management is also responsible for coordinating the incident response with other stakeholders and minimizing the damage of an incident.

10. According to NIST, which step in the digital forensics process involves drawing conclusions from data?

11. A cybersecurity analyst has been called to a crime scene that contains several technology items including a computer. Which technique will be used so that the information found on the computer can be used in court?

12. In which phase of the NIST incident response life cycle is evidence gathered that can assist subsequent investigations by authorities?

Explanation: NIST defines four phases in the incident response process life cycle. It is in the containment, eradication, and recovery phase that evidence is gathered to resolve an incident and to help with subsequent investigations.

13. When dealing with security threats and using the Cyber Kill Chain model, which two approaches can an organization use to block a potential back door creation? (Choose two.)

Explanation: In the installation phase of the Cyber Kill Chain, the threat actor establishes a back door into the system to allow for continued access to the target. Among other measures, using HIPS to alert or block on common installation paths and auditing endpoints to discover abnormal file creations can help block a potential back door creation.

14. What is defined in the SOP of a computer security incident response capability (CSIRC)?

Explanation: A CSIRC will include standard operating procedures (SOPs) that are followed during an incident response. Procedures include following technical processes, filling out forms, and following checklists.

15. How does an application program interact with the operating system?

16. Which tool included in the Security Onion provides a visual interface to NSM data?

Explanation: Dashboards provide a combination of data and visualizations designed to improve the access of individuals to large amounts of information. Kibana includes the capability of designing custom dashboards. In addition, other tools that are included in Security Onion, such as Squert, provide a visual interface to NSM data.

17. Which tool included in the Security Onion includes the capability of designing custom dashboards?

Explanation: Dashboards are usually interactive and provide a combination of data and visualizations designed to improve the access of individuals to large amounts of information. Kibana includes the capability of designing custom dashboards.

18. How is the hash value of files useful in network security investigations?

Explanation: When ELSA is used to investigate downloaded files, the hash value of each file is created and stored with other information about the file. If a cybersecurity analyst is suspicious of the file, the hash value can be submitted to an online malware repository site to determine if the file is known malware.

19. Which technology is a major standard consisting of a pattern of symbols that describe data to be matched in a query?

21. Which term is used to describe the process of converting log entries into a common format?

Explanation: For processing log entries, data normalization can organize and convert data values in datasets from difference sources into common format. The normalization makes it easy for further data analysis and reporting.

22. What is the purpose for data normalization?

Explanation: With data normalization various sources of data are combined into a common display format, which simplifies the searching for similar or relevant events.

23. Which personnel in a SOC is assigned the task of verifying whether an alert triggered by monitoring software represents a true security incident?

24. Refer to the exhibit. A security analyst is reviewing an alert message generated by Snort. What does the number 2100498 in the message indicate?

Explanation: The sid field in a Snort alert message indicates the Snort security rule that is triggered.

25. What are security event logs commonly based on when sourced by traditional firewalls?

26. What is the purpose for data reduction as it relates to NSM?

Explanation: The amount of network traffic that is collected by packet captures and the number of log file entries and alerts that are generated by network and security devices can be enormous. For this reason, it is important to identify the NSM-related data that should be gathered. This process is called data reduction.

27. Why would threat actors prefer to use a zero-day attack in the Cyber Kill Chain weaponization phase?

Explanation: When a threat actor prepares a weapon for an attack, the threat actor chooses an automated tool (weaponizer) that can be deployed through discovered vulnerabilities. Malware that will carry desired attacks is then built into the tool as the payload. The weapon (tool plus malware payload) will be delivered to the target system. By using a zero-day weaponizer, the threat actor hopes that the weapon will not be detected because it is unknown to security professionals and detection methods are not yet developed.

28. What is the objective the threat actor in establishing a two-way communication channel between the target system and a CnC infrastructure?

29. Which meta-feature element in the Diamond Model describes information gained by the adversary?

Explanation: The meta-feature element results are used to delineate what the adversary gained from the intrusion event.

30. In which step of the NIST incident response process does the CSIRT perform an analysis to determine which networks, systems, or applications are affected; who or what originated the incident; and how the incident is occurring?

Explanation: In the detection and analysis phase of the NIST incident response process life cycle, the CSIRT should immediately perform an initial analysis to determine the scope of the incident, such as which networks, systems, or applications are affected; who or what originated the incident; and how the incident is occurring.

32. After a security monitoring tool identifies a malware attachment entering the network, what is the benefit of performing a retrospective analysis?

Explanation: General security monitoring can identify when a malware attachment enters a network and which host is first infected. Retrospective analysis takes the next step and is the tracking of the behavior of the malware from that point forward.

33. Which classification indicates that an alert is verified as an actual security incident?

34. A network administrator is trying to download a valid file from an internal server. However, the process triggers an alert on a NMS tool. What condition describes this alert?

Explanation: Alerts can be classified as follows:

True Positive: The alert has been verified to be an actual security incident.
False Positive: The alert does not indicate an actual security incident. Benign activity that results in a false positive is sometimes referred to as a benign trigger.
An alternative situation is that an alert was not generated. The absence of an alert can be classified as:

35. A threat actor collects information from web servers of an organization and searches for employee contact information. The information collected is further used to search personal information on the Internet. To which attack phase do these activities belong according to the Cyber Kill Chain model?

Explanation: According to the Cyber Kill Chain model, in the reconnaissance phase the threat actor performs research, gathers intelligence, and selects targets.

36. Which HIDS is integrated into the Security Onion and uses rules to detect changes in host-based operating parameters caused by malware through system calls?

Explanation: OSSEC is a HIDS integrated into the Security Onion and uses rules to detect changes in host-based parameters like the execution of software processes, changes in user privileges, registry modifications, among many others. OSSEC rules will trigger events that occurred on the host, including indicators that malware may have interacted with the OS kernel. Bro, Snort, and Suricata are examples of NIDS systems.

37. Which type of events should be assigned to categories in Sguil?

Explanation: Sguil includes seven pre-built categories that can be assigned to events that have been identified as true positives.

38. A cybersecurity analyst is going to verify security alerts using the Security Onion. Which tool should the analyst visit first?

39. Refer to the exhibit. Which field in the Sguil application window indicates the priority of an event or set of correlated events?

Explanation: The Sguil application window has several fields available that give information about an event. The ST field gives the status of an event that includes a color-coded priority from light yellow to red to indicate four levels of priority.

40. Match the Snort rule source to the description.